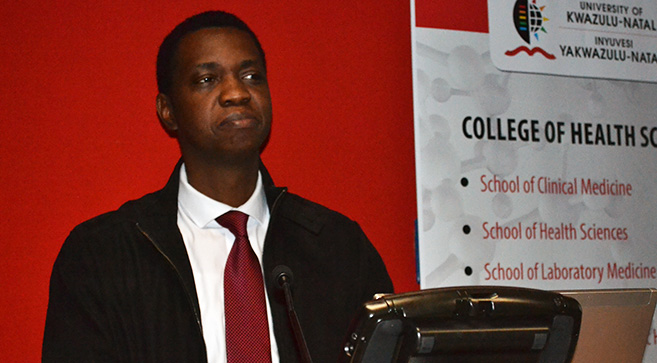 Mr Olubunmi Adebiyi of the Department of Pharmacology in the School of Health Sciences has completed a study titled: “Naringin Attenuates Oxidative Stress In Type I Diabetes Mellitus”.

Naringin is a chemical compound isolated from grapefruit. The study aimed to investigate the potential therapeutic benefits of naringin in ameliorating oxidative stress-induced cardiac and renal damage.

‘Naringin has been identified to have a variety of effects ranging from antioxidant to anti-inflammatory and anti-mutagenic potentials,’ Adebiyi said.

The study investigated the usefulness or otherwise of the antioxidant potentials of naringin in preventing or alleviating oxidative stress induced diabetic cardiomyopathy.

According to Adebiyi, chronic hyperglycemia in Type I diabetes mellitus is a trigger of oxidative stress. ‘Antioxidants have potential therapeutic benefits that can be explored in the prevention of oxidative stress-induced diabetic complications. Naringin, a bioflavonoid is well known for its antioxidant activity.’

Adebiyi’s study was conducted at Molecular and Clinical Pharmacology laboratory in the Department of Pharmacology and according to the researcher it was still too early to make recommendations, but naringin appears to hold a lot of promise in mitigating oxidative stress induced complications in diabetes mellitus.

‘Naringin does not possess hypoglycemic effects but may confer reno- and cardio-protective effects in a diabetic state via its antioxidant action.

‘Currently a lot of focus is on using nautriceuticals in treating ailments.  Nautriceuticals are biologically active compounds derived from dietary sources and since naringin is readily found in grapefruit juice, it will provide a cheap alternative in the management of oxidative stress induced complications in diabetes mellitus,’ said Adebiyi.

Adebiyi said the study would be completed soon.