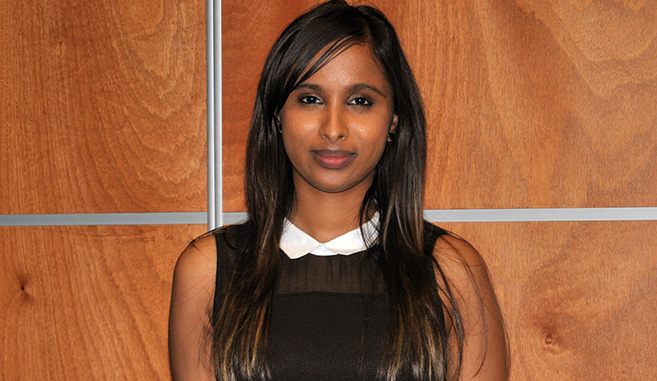 The study titled: “The Role of the Pyroptotic Pathway in a Tat-induced Stressed Model of HIV-Associated Neurocognitive Disorder”, aimed to provide insight into whether pyroptosis could be a contributing factor leading to cell death and the development of HIV-related neuropathology.

The young scientist said she was shocked, excited and mostly humbled about delivering a winning presentation. ‘I want to congratulate everyone who participated in the Symposium as I felt there was a remarkable level of research this year. I am incredibly thankful for my prize as it will afford me the opportunity to represent UKZN and also gain international exposure in my field of research.’

According to Harricharan, a lot of previous studies have focused on how HIV affects the rest of the body but there is little information about how HIV affects the brain. ‘We do know that HIV kills neurons (brain cells) but we want to understand exactly how it does that.  Since we cannot collect brains from humans, we used rats to create a model of HIV-Associated Neurocognitive Disorder.

‘While antiretroviral drugs are helping HIV-infected people live longer, these people have a greater chance of developing HIV-Associated Neurocognitive Disorder. People who are affected by the disorder have symptoms like memory loss, problems with movement and changes in their behaviour. We wanted to know whether brain cells could die by a process called pyroptosis in our model of HIV-Associated Neurocognitive Disorder,’ she explained.

Harricharan investigated the role of pyroptosis (the programmed cell death pathway which results in an inflammatory response) as a possible contributing factor to the development of HIV-Associated Neurocognitive Disorder.

She said the results of the study were novel, ‘But we do understand that it is only a starting point as there are several aspects of the association between pyroptosis, neuroinflammation and HIV-Associated Neurocognitive Disorder that require further investigation.’ said Harricharan.

She said the study provided preliminary data and insight into the mechanism of pyroptosis in a model of HIV-Associated Neurocognitive Disorder.  According to Harricharan, this information will form the foundation of further studies that aim to understand this association.

‘Novel information, like that generated from our study, also contributes to the expanding database of scientific knowledge which aims to attenuate the development and progression of human diseases, thereby improving the quality of life for people.’

She acknowledged Dr V Thaver, Professor W Daniels and fractional professor, Professor V Russell for their contribution to the project.

Harricharan is currently involved in an additional study focusing on depression and wants to become involved in clinical research.

In 2014 she won awards at the School of Laboratory Medicine & Medical Sciences Research Symposium and the Physiology Society of Southern Africa conference.

Harricharan is passionate about community upliftment and creating awareness through education.  She has a Facebook page, Neuroscience in Africa, which disseminates information about neurological disorders in simple terms. The page also aims to reduce the stigma/stereotypes attached to neurological conditions.