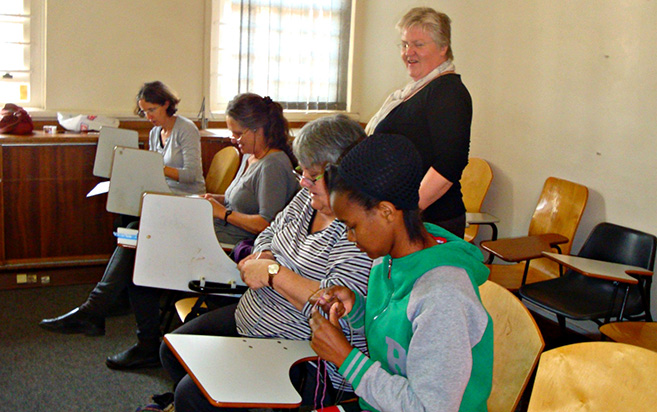 The first Trade School, hosted by a small group of staff and students under the aegis of the Paulo Freire project of the Centre for Adult Education in the School of Education, was held recently on the Pietermaritzburg campus.

The Trade School movement, based on the premise of a self-organised barter-for-knowledge schools across the world, started in 2010 with a small group of friends in New York and spread to Virginia and later Milan in Italy in 2011. Since then it has reached big cities on almost every continent except Africa until this year when the first Trade School was run on UKZN’s Pietermaritzburg campus.

According to Dr Anne Harley of UKZN’s Centre for Adult Education, Trade Schools are organised by volunteers who operate as a non-hierarchical collective with anyone  SEQ CHAPTER \h \r 1 able to be a teacher or a student. ‘The Trade School concept disrupts the idea that only certain people have knowledge or skills, and that it is necessary to pay money to learn something. However, it recognises that time and energy are valuable, and so classes are not free,’ she said.

Harley explained that the concept operated along the lines of ‘teachers’ proposing classes and asking for barter items from ‘students’.

‘Barter items could be anything, but the emphasis is often on time and energy, rather than things. For example, if a person teaches a class about knitting socks, they could ask students to bring interesting knitting patterns, or wool, or knitting needles, or demonstrate a new stitch, or promise to donate the socks they knit to a local charity, or to pass on their skills to others. Students’ sign up for classes by agreeing to bring a barter item for the “teacher”,’ said Harley.

Dr Kathy Arbuckle offered Belly dance for beginners at the Trade School. ‘I learned belly dancing from a wonderful teacher, Anne Knowles, who started the Raqs Sharqi Dance Company in Pmb. I danced as a hobby and for exercise for 10+ years, before eventually starting my own class/dance group.’ Arbuckle says she sadly hasn’t found time to dance for a couple of years, but managed to dust off her coin belt and shared ‘this beautiful, fun dance form at the Trade School’.