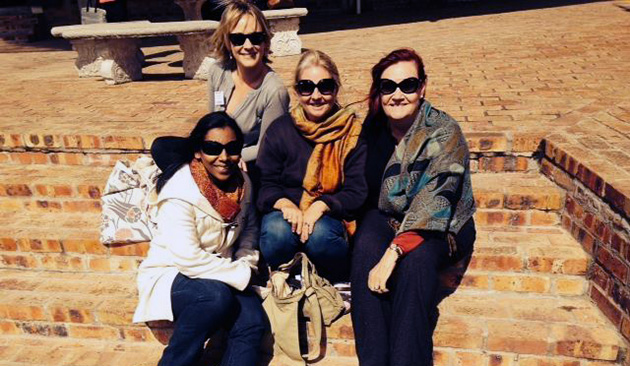 Academic Leader of Research in the School of Arts, Dr Nicola Jones, and Lecturer, Dr Subeshini Moodley of the Discipline of Media and Cultural Studies, represented UKZN at the annual South African Communications and Research Conference (SACOMM) hosted in Cape Town by AFDA, the SA School of Motion Picture Medium and Live Performance.

The academics presented their papers under the theme: “The ME Factor: Media, Entertainment, Education, Entrepreneurship and Ethics – Bridging the Digital Divide in Developing Nations. Emerging Voices. Emerging Markets”.

Jones presented a paper titled: “Damming the Fountains of Justice: an Examination of Three South African Publications’ Coverage of Reeva Steenkamp’s Alleged Murder in the Context of South African Crime and Court Reporting”.

She was also invited to participate in two panel discussions: “Performing Local Identities, and What Mark Should we Give This? Problems of Assessment in Post Graduate Research Output”.

Moodley presented a paper on: “What are the ‘Silences’ in Self-Reflexive Filmmaking Saying?: Voicelessness as a Form of Feminist Resistance”, which was based on the findings from her PhD dissertation titled: “Narrative Possibilities in a Postcolonial Context: Exploring Self-Reflexive Film as a Critical Articulation of the Stories of South African Hindu Women”.

The Conference provided a valuable platform to network with academics from other institutions and to discover new developments in the academics’ fields of interest. Moodley explained that some of the new and interesting developments in film studies pertained to research papers which looked at the changing representations of women in mainstream films and how women were represented from an eco-feminist perspective, the changing dynamics of documentary film-making specifically in conflict ridden countries, and how animated films/documentaries could be used as a form of therapy.

The papers by Jones and Moodley were well received, with Jones submitting for publication a paper titled: “Illusions of Reality? Some Reflections on James Oatway’s Photographic Images of Xenophobic Violence in South Africa”.

A great honour and highlight for UKZN and the contingent was Professor Keyan Tomaselli and Professor Ruth Teer-Tomaselli, both of the Centre for Communication, Media and Society, being awarded Lifelong Fellowships of SACOMM.