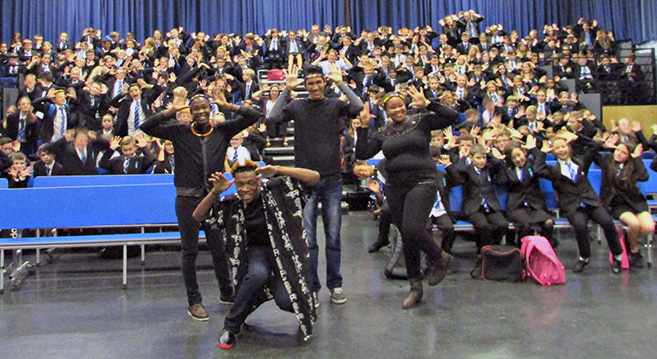 Ms Luthando Ngema, a Lecturer within the Department of Media and Cultural Studies in the School of Arts, recently embarked on an exciting three-week intercultural experience.

It began with a trip to Plymouth in England and then to Cape Town to present at the South African Communication Association (SACOMM) Conference and finally ending in Durban for a workshop at Bechet High School in Sydenham.

Ngema and ARROWSA (Art a Resource for Reconciliation Over the World) Facilitator, Mr Bhekithemba Dlamini, and UKZN first year students and ARROWSA participants, Mr Tshimanga Tshiteya and Mr Darnelle Fortune, participated in the International Development of Reconciliation through the Arts (Indra) Congress and ARROWSA Intercultural Exchange Programme which aimed to bring together youth-based organisations to exchange knowledge and skills through the arts.

Through the work done at Bechet High School, ARROWSA was granted funding by the National Arts Council to partake in activities at the Indra Congress, where the group from ARROWSA were able to perform and participate in arts and culture activities, organised by Miss Alix Harris, Indra Congress facilitator based in Plymouth.

They were also hosted for three days at Stoke Dameral Community College where they performed for over 250 pupils. ‘At the school we work-shopped on environmental impacts on society (which is the theme that ARRROWSA is currently working on). While in Plymouth they also learned about the Barbican theatre, a theatre founded by David Oddie and where the theatre group from INDRA congress is based,’ said Ngema.

‘We visited the City College to attend drama and dance classes that teach from a participatory perspective and also TR2 which is a learning centre for Theatre Royal Plymouth which has rehearsal studios, and a costume department and a workshop, which makes the sets for productions at the Theatre Royal and shows that are being performed elsewhere in England,’ said Ngema.

On her return from England, Ngema presented her paper at the SACOMM Conference hosted at AFDA in Cape Town.  The paper was titled: “Stakeholder Engagement and Participation Through the Marketing of Natural and Cultural Heritage:  ARROWSA”, the Palmiet Nature Reserve and Bergtheil Museum, Westville, KZN.

In it she discussed the challenges of a participatory communication approach in marketing natural and cultural heritage educational programmes to schools by ARROWSA from 2006 to 2015.