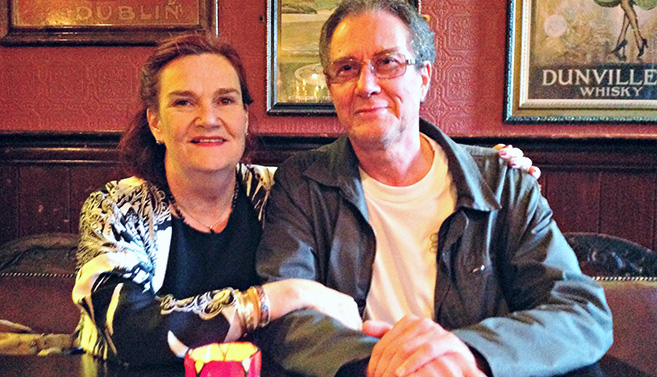 Professor Keyan Tomaselli and Professor Ruth Teer-Tomaselli of the Centre for Communication, Media and Society (CCMS) were recently made Lifelong Fellows of the South African Communication Association (SACOMM).

They received the accolade at the association’s gala dinner in Cape Town.

UKZN Media Lecturer Dr Nicola Jones provided a motivation for the academic duo to be nominated, highlighting their achievements, success and their invaluable contribution to academia, spanning many years.

Jones noted that Professor Keyan Tomaselli’s key insights into South Africa’s media and film industry were highly regarded among his peers. He is NRF- rated and one of South Africa’s leading media researchers. ‘His intellectual voice exceeds just publication in journal articles and books, as he has shared his thought widely on countless platforms over many years in conference proceedings and appearances, opinion pieces and blogs.

‘From a personal point of view, Professor Keyan Tomaselli has been invaluable: he is always willing to mentor and offer advice, and has never been shy to speak out against what he believes is wrong,’ said Jones.

Speaking about this achievement, Tomaselli said: ‘This is wonderful recognition from my peers in communication and media studies on my work in helping to build the South African Communication Association over the past 36 years. It also recognises my life-long contribution to the field itself. To be thus recognised by the new generations of scholars is an added honour.’

Jones also noted Teer-Tomaselli’s admirable dedication to research, especially in relation to South Africa’s political economy of media and technology and described her as one of South Africa’s foremost woman media academics with an impressive publication record, serving on numerous editorial boards and her expertise and commitment to South Africa’s communications industry.

‘Professor Teer-Tomaselli has played an important mentorship role, providing wisdom and understanding in what have recently been extremely challenging academic times. She has immense respect among colleagues both within UKZN and at other national and international universities, and her students adore her!’

‘In addition, she has provided a living example of a woman who can balance family responsibilities and a flourishing career. There could not be a more worthy candidate for this nomination.’