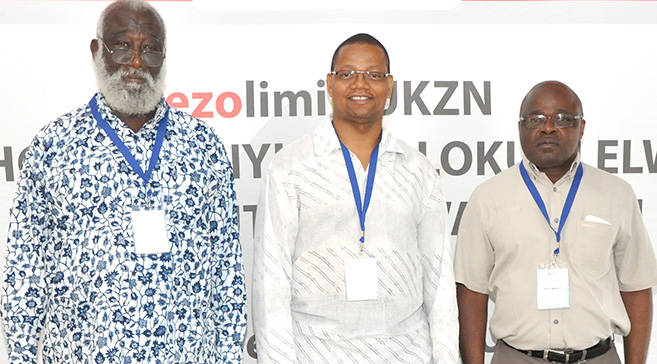 Advancing the Intellectualisation of Indigenous Languages in Higher Education

UKZN’s Language Planning and Development Office hosted the inaugural bi-annual Language Research Symposium on the Howard College campus to provide a platform for academics involved in various language projects across all the four Colleges to review progress on the implementation of the University’s Language Policy and Plan.

Professor Kwesi Kwaa Prah of the Centre for Advanced Studies of African Society delivered a keynote address at the Symposium on the intellectualisation of African languages.

Prah emphasised that African languages were crucial to African development, stressing the need to swiftly and effectively enable these languages to carry scientific and technological capacities, rational and cultivated logical approaches, and analytical and researched techniques for them to be intellectualised for the social and economic development of African society.

Professor Phalandwa Mulaudzi of the Academy of African Languages and Science delivered the keynote address on the second day of the Symposium.

A wide range of papers were delivered, including: “The Benefits of Indigenous Languages in the Development of Legal Education and Access to Justice”, by Mr Khulekani Zondi, and “IsiZulu Computer-Assisted Language Learning Tool for the Advancement of Teaching and Learning of Health Sciences Students”, by Ms Roshni Gokool.

The Deputy Vice-Chancellor: Teaching and Learning, Professor Renuka Vithal, stressed the importance of focusing on research in language. ‘It is very important to develop African languages as academic languages because this helps with the creation of the necessary vocabulary and terminology,’ said Vithal.

She said the University was pleased to be contributing to corpus development in isiZulu and encouraged more academics to contribute articles in African languages to established journals.

The Director: University Language Planning and Development Office, Dr Langa Khumalo, said: ‘In order for indigenous languages to be used in education as languages of instruction, innovation, science, mathematics and logic, there has to be a clear, concise, conscious and careful process of intellectualising them.’