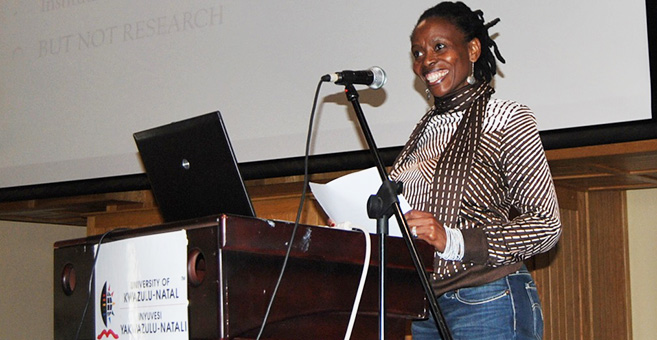 “African Vision for an African Research: What Really Needs to Transform?”, was the title of a stimulating public lecture delivered at UKZN by the University of Cape Town’s (UCT) Associate Professor Elelwani Ramugondo.

Invited by the School of Health Sciences’ Academic Leader for Research, Professor Mershen Pillay, Ramugondo said South African universities were currently at best instrumentalist and at worst opportunistic rather than being sites of meaningful interpretation and true vanguards for academic freedom.

‘We ought to be both deeply suspicious and concerned when we are pushed under the guise of scientific objectivity to be silent about who we are and our ultimate concerns as researchers,’ she said.

Ramugondo said academic spaces were never neutral. Academics could only strive for honest disclosure and seek authentic resonance in their findings with those they researched.

‘At times we will offend those who champion dominant interests when our research unmasks epistemological violence or other forms of injustice.

‘Freedom to self-identify and to connect with students and communities, especially those ill-served by an unequal society, represent true academic freedom. This is what will indeed decolonise the academy.’

Ramugondo joined UCT and served as Head of the Occupational Therapy Division from 2010 until 2013. She is currently Special Advisor on Transformation to the Vice-Chancellor at UCT and is widely regarded as both a play activist and a serious play scholar. Ramugondo draws from research and everyday observations of play and the arts to explain the politics of human occupation within the context of rapid social change, and to raise occupational consciousness

Ramugondo’s research takes an intergenerational approach and negates the adult-child binary often prevalent within the study of play and the arts. She currently mentors a number of PhD candidates using case study and embedded methodologies, from critical theory or post-structuralist perspectives.

The public lecture was attended by a multidisciplinary and multi-professional mix of staff and students who benefited from ‘meaningful engagement’ with Ramugondo, especially over tea and during the question and answer session.