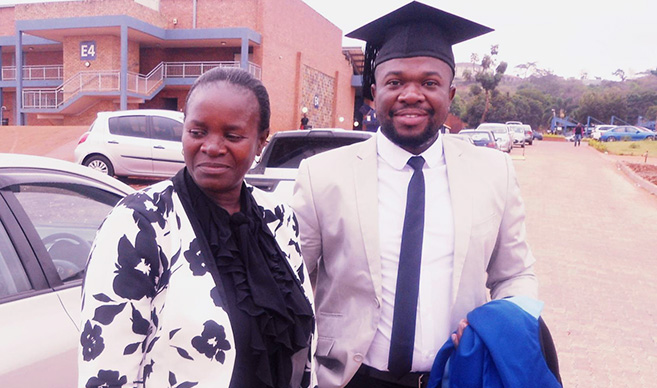 ‘Graduating is one of the greatest accomplishments in one’s life. My mother has been, and will always be the person I look up to,’ said an overjoyed Liabara.

The National Research Foundation awarded Liabara a year’s internship with the CHS Public Relations team at UKZN to gain work experience and enhance the College website.

He said he had always been fond of technology and its emerging innovations. He did not regard himself as a user but rather as an innovator and developer of trends leading to the future. ‘I decided to follow my passion and study Computer Science,’ he said.

Liabara and eight classmates were asked in their honours year by the Deputy Chancellor and Principal of the University of Venda to assist the IT department with the activation of student emails, updating the website and digital board of the university.

Liabara worked as a Student Tutor at the Centre of Higher Education, Teaching and Learning (CHETL) at the university and also worked as a part-time IT Technician at a local sports bar.

He said focus and determination were important as was having a good support system for which he thanked his family and friends.

In the future, he hopes to start an information technology company so he can give back to the community who made him what he is today.