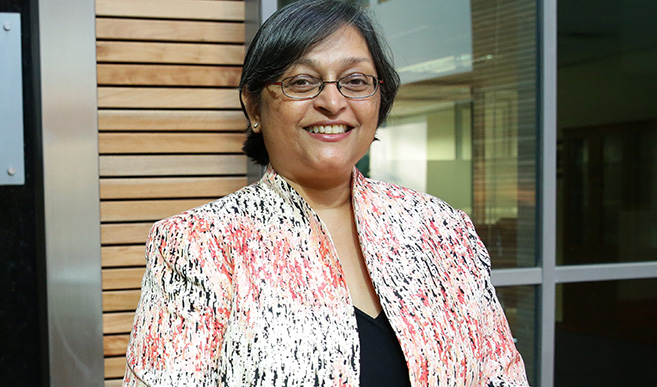 UKZN’s Professor Quarraisha Abdool Karim has been named one of five ‘exceptional laureates’ of the 2016 prestigious L’Oréal-UNESCO for Women in Science Award in Africa and the Arab States for her ‘remarkable contribution to the prevention and treatment of HIV and associated infections, greatly improving the quality of life of women in Africa’.

The announcement was made by the L’Oréal Foundation and the United Nations Educational Scientific and Cultural Organsiation (UNESCO).

‘I am honored to be selected for this Award,’ said Professor Abdool Karim, ‘and feel privileged to be among the Award’s recipients, as many of the past awardees have been an inspiration to me and many other women researchers I work with.’

Abdool Karim is Associate Scientific Director of the Centre for the AIDS Programme of Research in South Africa (CAPRISA), Honorary Professor at UKZN’s College of Health Sciences in the School of Nursing and Public Health, and Professor of Epidemiology at the Mailman School of Public Health at Columbia University in New York.

Nominations for this prestigious award were received from about 2 600 leading scientists globally and the selection was made following a rigorous process by an independent and international jury of 13 prominent scientists in the international scientific field.

President of the Jury and Nobel Laureate, Professor Elizabeth Blackburn, congratulated the winners, saying: ‘2016’s Laureates bring an extraordinary vision and immediate solutions to major human health issue. All their careers are exceptional, their discoveries truly new and they epitomise top-level research.’

An NRF-A rated scientist, Abdool Karim’s scientific and research contributions in understanding the evolving HIV epidemic over the past 25 years has had a profound impact on HIV treatment and prevention policies at a global level. In 1990 she led one of the first population-based HIV seroprevalence surveys in Africa that showed the high rates of HIV infection in young women.

Abdool Karim is also Chair of the SA National AIDS Council Prevention Technical Task Team, a member of the UNAIDS Scientific Expert Panel and Scientific Advisor to the Executive Director of UNAIDS.

She will receive the 2016 L’Oréal-UNESCO for Women in Science award at a ceremony in Paris in March.