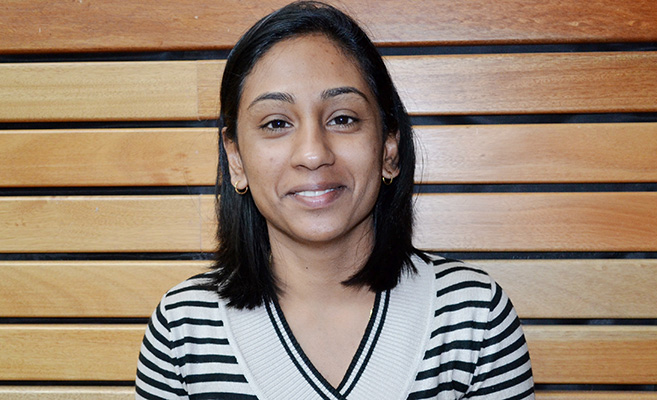 Pre-eclampsia is a pregnancy disorder characterised by high blood pressure and a large amount of protein in the urine.

Presented at the International Federation of Placenta Association’s Conference held in Australia, Maduray’s study was titled: “A Comparative Morphometric Evaluation of Normotensive and Pre-eclamptic Placenta from Pregnant South African Women”.

The study involved the photographing and analysing of 30 normotensive and 30 pre-eclamptic placentas at delivery.

Placentae of pre-eclamptic pregnancies showed more abnormalities with regards to shape and the presence of oedema – fluid retention – compared to the normotensive group, the study found.

The study highlighted that the mean placental weight, thickness, diameter and volume were significantly lower in pre-eclampsia compared to normotensive pregnancies, and Maduray was applauded by the delegates as well as her supervisors, Professor Jack Moodley and Professor Anita Naicker, for her contribution to on-going research on pre-eclampsia.

Maduray received an Intercontinental Award from Connect Africa Scholarships Programme issued by the KwaZulu-Natal Research Institute for Tuberculosis and HIV to present her findings at the IFPA conference.

‘The opportunity to talk and network with renowned scientists in the field of placentology and pre-eclampsia abroad was fantastic. It helped promote new research questions that will complement my work,’ said Maduray whose passion is to contribute to solving major health related issues in South Africa.

She said she intended to continue with academic research to increase the body of scientific knowledge on medical topics such as pre-eclampsia, HIV and cancer.