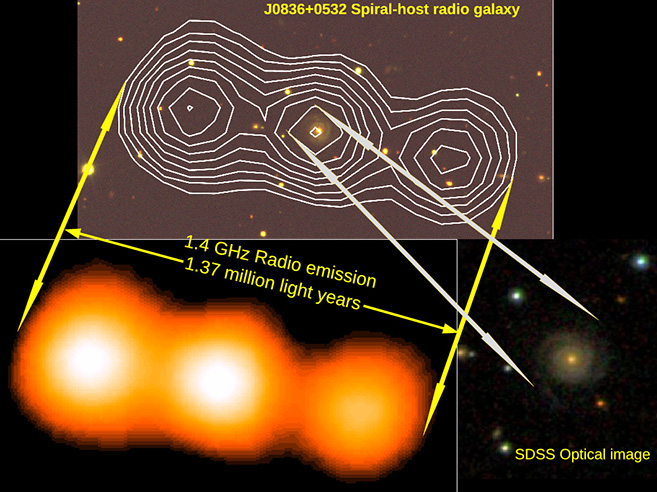 An international team of astronomers from South Africa, India and France, has discovered four spiral galaxies with radio emitting jet-lobe structures extending up to nearly a million light years.

These extremely rare and enigmatic galaxies were found in a systematic search that combined a whopping 187 000 optical images of spiral galaxies from the Sloan Digital Sky Survey (SDSS) DR7 with the radio emitting sources from two radio surveys - Faint Images of the Radio Sky at Twenty-cm (FIRST), and NRAO Very Large Array (VLA) Sky Survey (NVSS) - both carried out with the VLA radio telescope in the United States.

Traditionally, such galaxies which emit powerful radio waves (radio galaxies) are found to be hosted in massive, gas poor elliptical galaxies characterised by feeble star formation rates. It is believed that the relativistic jets emanating from the accreting Super Massive Black Holes (SMBHs) at their centres can easily plough through the rarer InterStellar Medium (ISM) of elliptical galaxies and reach scales up to millions of light years.

Unlike conventional radio galaxies, which are almost always found in ellipticals, these four galaxies (named in astronomical parlance as J0836+0532,  J1159+5820, J1352+3126, and J1649+2635) are found to be hosted in spiral galaxies. Observations at ultraviolet and Infrared wavelengths indicate that these host spiral galaxies are actively forming stars at an approximate rate of 1.7 – 10 solar mass a year, like most other spirals. It is estimated that all these galaxies contain at their centre a Super Massive Black Hole (SMBH) with a mass approximately of a billion times that of the Sun.

J0836+0532 is a new discovery while J1649+ 2635 was reported independently in a study led by astronomer Minnie Mao earlier this year. Both J0836+ 0532 and  J1649+ 2635 are face-on spirals and do not show any detectable signature of disturbance caused by a recent merger with another galaxy.

To understand the formation of these newly discovered spiral-host radio galaxies is a challenge in the present theoretical model. Using current available data on these sources it is speculated that the formation of spiral-host double-lobe radio galaxies can be attributed to more than one factor, such as the occurrence of strong interactions or mergers with other galaxies, and the presence of an unusually massive SMBH, while keeping the spiral structures intact.

Since only one among four was found in cluster environment, it implies that the large scale environment is not the prime reason for triggering radio emission. Mergers or interactions could be more likely. In fact, two galaxies J1159+5820 and J1352+3126 in this study show evidence of mergers.

The detailed research paper on the discovery of these spiral-host radio galaxies will appear in a forthcoming issue of the monthly Notices of Royal Astronomical Society Journal. The article is available in Astroph arXiv:1509.01559.

‘The motivation for this search came from our earlier work which aimed to study radio emission in Seyfert galaxies (a low-luminosity subclass of Active Galactic Nuclei hosted in spiral galaxies), where they found an unexpectedly high fraction of uncommon radio-loud Seyfert galaxies,’ said Singh.

‘In order to attain a better understanding of the formation of these galaxies, the research team is observing these galaxies at different frequencies. The team has already acquired low frequency radio observations with the Giant Metrewave Radio Telescope (GMRT) in India. The multi-frequency radio observations will enable the study of the radio structures at different spatial scales and also in estimating the time elapsed since the radio emitting jets were ejected from the centre of each galaxy.’

The team believes their unique discovery can be considered as a test bed to find rare populations of spiral-host double-lobe radio galaxies in the distant universe using more sensitive surveys from upcoming facilities such as the Large Synoptic Survey Telescope (LSST) and the Square Kilometre Array (SKA).

This work was supported by the Square Kilometre Array (SKA) telescope project in South Africa and the Indo-French Centre for the Promotion of Advanced Research.