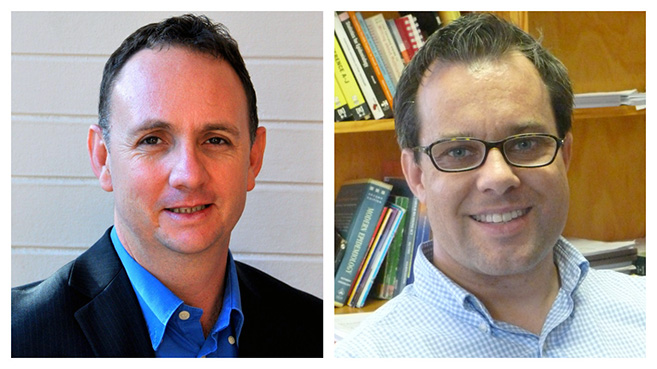 A UKZN researcher and his colleague from Harvard in the United States have been awarded a R32.5 million grant over a five-year period which will take their successful collaboration in cutting edge HIV treatment and prevention research into its second decade.

They are UKZN’s Professor Frank Tanser of the College of Health Sciences who is based at the Wellcome Trust’s Africa Centre for Health and Population Studies, and Professor Till Bärnighausen of Harvard’s TH Chan School of Public Health.

The new R01 grant from the National Institutes of Health (NIH) builds directly on a previous NIH R01 grant that the two Principal Investigators jointly led.

The specific aims of the new project, funded by the National Institute of Child Health and Human Development (NICHD) within NIH, are to determine the behavioural and biological mechanism through which high Antiretroviral (ART) coverage causes improvements in population health and social and economic outcomes.

In two recent papers published in Science, Tanser and Bärnighausen demonstrate that the US President’s Emergency Plan for AIDS Relief (PEPFAR) supported the public sector scale up of ART in rural South Africa, led to large increases in adult life expectancy and protected HIV-uninfected individuals from acquiring HIV.

Nevertheless, HIV mortality and incidence rates remain high in this setting as they do in many similar communities in sub-Saharan Africa.

To inform future implementation of ART programmes, including under treatment-as-prevention scenarios, further evidence is needed in two areas. ‘First, the mechanisms through which ART scale-up reduces HIV incidence – the “pathways to prevention” – in particular the role of behavioural vs biological pathways in determining HIV incidence; and second, the reasons why people are still dying from HIV in the era of free and widely available ART,’ said Tanser.

‘Our long-term goal is to identify optimal strategies to deliver ART in poor rural communities in sub-Saharan Africa and to achieve maximal therapeutic and preventive impact of ART,’ said Bärnighausen. ‘Our new work will elucidate the pathways to ART impact and identify novel approaches to improve this impact.’

To achieve their goal, the researchers will analyse longitudinal surveillance data collected by the Wellcome Trust-funded Africa Centre in Mtubatuba, in a population cohort covering every individual in a community of 150 000 people in rural KwaZulu-Natal. This population-based cohort data includes individual-level HIV biomarkers, sexual behaviours, health care seeking, economic indicators, ART knowledge and attitudes, and verbal autopsies for cause of death as well as geo-spatial data on people’s residencies and public infrastructure, such as ART clinics, schools, and roads.

Tanser and Bärnighausen lead highly productive research teams at the Africa Centre and Harvard. ‘We believe that this grant will enable us to take our research to the next level,’ said Bärnighausen. ‘It will fund both novel data, including biomarkers, and innovative methodological approaches, including a range of quasi-experiments to establish causal relationships,’ said Tanser.

‘We are grateful to NIH to have again recognised that our research at the Africa Centre has the potential to generate insights into the population health impact of ART that only very few sites worldwide can generate.’