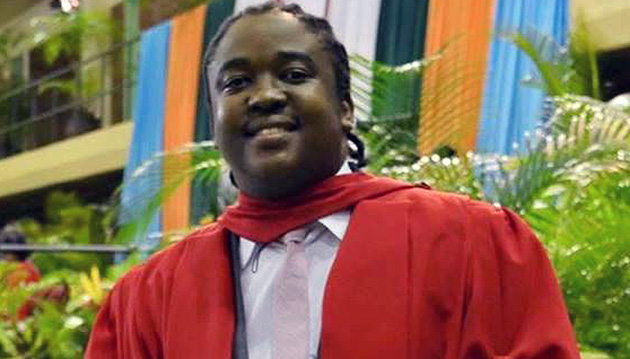 Dr Andile Khathi (27) of Ntuzuma, who recently graduated with a PhD from UKZN’s School of Laboratory Medicine and Medical Sciences, has been appointed as a Lecturer in the Human Physiology Discipline.

‘It feels great,’ said Khathi. ‘I am in a position where I can brainstorm ideas for research and engage with the leading academics in my field while I also impart knowledge to those interested in joining the scientific community.’

Khathi was selected to deliver the Inaugural Professor C T Musabayane Memorial Lecture at the Physiological Society of Southern Africa Conference in Johannesburg following the recent death of the legendary Professor who headed the former School of Medical Sciences in the previous Faculty of Health Sciences at UKZN and supervised an impressive number of doctoral candidates, including Khathi.

His talk at the conference was titled: “Diabetes Mellitus Management: Review of the Beneficial Effects of Plant-Derived Bioactive Extracts on some Selected Metabolic Parameters”, and based on work Musabayane did on the effects of plant bioactive compounds on the complications of diabetes.

‘The Conference itself was great and I got a chance to meet some of the leading scientists in Africa.  I feel that the PSSA did a great job in honouring Professor Musabayane and truly marked his place as one of the legends in our country,’ Khathi said.

Khathi said he knew he wanted to become a researcher as early as Grade 6. ‘I’ve always enjoyed sharing any knowledge that I have so I guess it was only natural that I became an academic.’

UKZN offered the kind of qualification he had in mind as a high school pupil, he said, and his decision was also influenced by the passion of students already enrolled at UKZN.

‘At present we are currently working on developing a new model for Type 2 diabetes mellitus. I am also involved in looking at epigenetic factors that lead to the development of metabolic syndrome. I am also examining the effects of novel synthetic chemical compounds as well as medicinal plant products in the management of diabetes mellitus and metabolic syndrome as a whole.’>

‘I am very grateful to all my friends, family and colleagues for the support that they have given me throughout my studies. Without them, I would’ve given up a long time ago.’