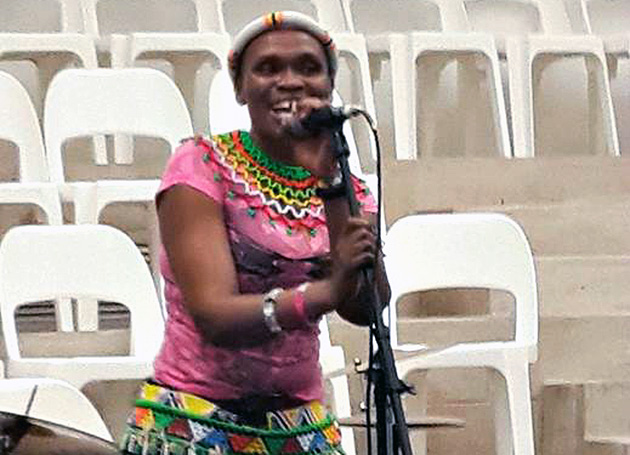 Nguqu’s concert was community orientated as she involved fellow practitioners, in a bid to share values and attitudes with them. It involved a dialogue between maskandi gospel practitioners from the Enkazimulweni Outreach Centre and formed part of her study of the maskandi gospel music genre (Maskanda or maskandi is a Zulu folk kind of music) and its role in Zulu/African identity and tradition.

Speaking about the recital, Nguqu said: ‘The show turned out to be a great success and I took on the role of a protagonist on the participatory research I am currently doing. Since the course is Applied Ethnomusicology, the aim of the concert was for me to share values and attitudes with fellow practitioners, and have the community review my music as my study.’

The other featured groups in the concert were: Jesus is Alive Ministry and Ubuhle bezinsizwa, as well as the artist Pastor VT Ngobese who spoke about the issue of traditional music and dance within the church.

‘I’d say my mission was accomplished in this concert and I am looking forward to finalising my research paper at the end of the semester,’ she added.

Her research is a study of maskandi gospel and its role as an expression of African identity and tradition.  ‘My hypothesis states that maskandi gospel can be an autonomous genre that can be used in the service of God. A way of Africans to praise and worship God in their Nguni languages.

‘The interest in maskandi gospel bore the investigations of patterns, values and shared attitudes by its practitioners. This work is an inspiration to those individuals who have lived in between beliefs around African culture and those religious values which were, in a way, the influence of the so called colonial Christianity.

‘In an auto-ethnographic research method this study portrays the purpose of the genre as a form, a tradition and constructionism.’

Nguqu, who hails from Lusikisiki in the Eastern Cape, started her career in music as a backing vocalist for Mfiliseni Magubane, a Maskandi musician, who inspires her music a lot.

Although she is into jazz and Western classical music, she focuses on African Music and Dance, being involved with many theatrical productions and has performed around South Africa and abroad.

After a long time of involvement with theatrical productions she started to learn to read and write music through the Bartell Arts Trust (BAT) Centre live band development programme.

In 2012 she enrolled with UKZN and acquired a BA Music degree. She has published a radio drama ‘Nalokhu Kuzodlula’ (2014) and has recorded an album titled ‘Mavula Kuvaliwe’ (2010).

Nguqu’s original songs were recorded in 2009 on an album titled: Mavula-Kuvaliwe.

She holds an award from the KZN Provincial Department of Arts and Culture for Best Maskandi Band and also received a Certificate of Merit in every single AMD module she took, which was described by Dr Opondo as ‘a unique milestone, the first time ever in 18 years of the Programme’s existence’.

Opondo further stated, ‘Supervising Nozuko's work brings me great joy as we embark on new ground as she completes an autoethnography. Nozuko has the rare gifts of doubling as a distinguished performer and a young researcher with enormous potential. Her triple presentation during the recent African Cultural Calabash and International African Musics Symposium lay testament to her abilities as an academic, performer and teacher.’

As a solo artist, Nguqu has been featured in highly recognised events such as the Annual Woman Power in Music 2014 and UKZN’s Annual African Cultural Calabash 2015. ‘My vision is to see the world being healed, educated, developed and entertained through live music.’