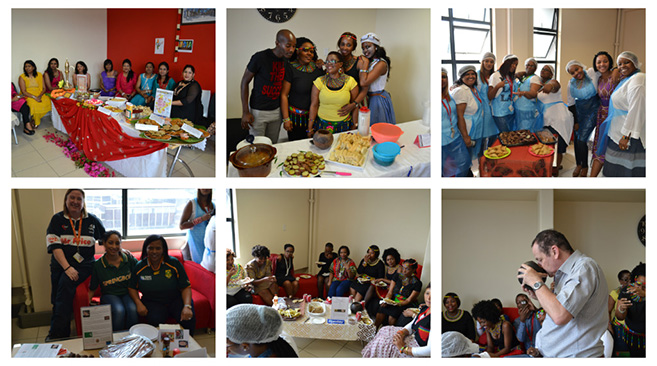 Organiser, SCM School Manager, Ms Antoinette Botha, said the event showcased different South African cuisine and aimed to bring the School’s professional services staff together and generate an understanding of the different cultures within the body.

Staff members were requested to form groups – five were formed - along cultural lines and prepare and share a traditional meal which represented their culture and heritage.  They were also requested to explain the significance of the meal.

The first group led by Botha oraganisd a braai which is associated with the Afrikaner culture, but over the years has been adopted by South Africans of most ethnic backgrounds.  Botha gave a brief history of the braai and how it is prepared.

‘A braai is an occasion.  No-one has friends over to microwave,’ she said. ‘And a braai is not Afrikaans for BBQ!’  The team dished up boerewors and a delicious potato bake with bacon. Lekker kos!

The second group provided a combination of Zulu food with an Indian touch. Introducing the food, Ms Thuli Ngcobo from the postgrad office, introduced the audience to umxhabhiso (tripe), amahewu (a traditional drink made of mealie meal, jeqe (steamed bread/dumpling), sweet potatoes, sugar beans, curried samp, imfini (spinach) and a calabash of umqombothi.

The team had to explain the different elements of their food and how it is grown. Ngcobo also explained the traditional importance of having a calabash in the house. ‘It is a symbol of respect for our visitors to show them they are welcome in the home.’

The team also had isitabmu (samp and beans) with an Indian touch. The dish ‘was a modification of a modification’, said Ms Fazana Karim of the School’s laboratory, and had mutton, Indian spices and herbs.

The third group comprising Indian staff, prepared colourful Indian dishes, from starters to main course and desert. The presenter, Head of Clinical Support, Ms Sagree Pillay, told the gathering how most Indian dishes were influenced by religion and vegetarianism. The team served a Gujarati dish eaten for breakfast, and roti (flat bread) which is popular among the Indian community. They also had deep fried Indian snacks.  There was only vegetarian food since most of the team members were fasting.

The fourth group presented a combination of Zulu and Indian snacks or starters. They served samosas, baja (chilli bites), amadumbe (yam) and ubhatata (sweet potato). The presenter, Ms Janice Pillay of Teaching Admin, told the history of samosas. She said the snack gained popularity among Indians after it was approved by Indian royalty.  One of her team members, Ms Anitha Pillay, demonstrated how to make a samosa while Ms Mbalenhle Maseko explained the process of growing and cooking amadumbe.

The fifth group began its presentation with a traditional song which got everyone in the room in the mood. The group called itself the Nguni Chefs. On its table it had sweet potato, steamed bread, nhloko (cow’s head), chicken necks, giblets and hearts, and umqombothi.  Secretary to the Dean and Head of School, Ms Sithembile Khuzwayo, presented the various items.

Botha and SCM Dean and Head of School, Professor Richard Hift, thanked the staff for participating in the event and for preparing great meals.