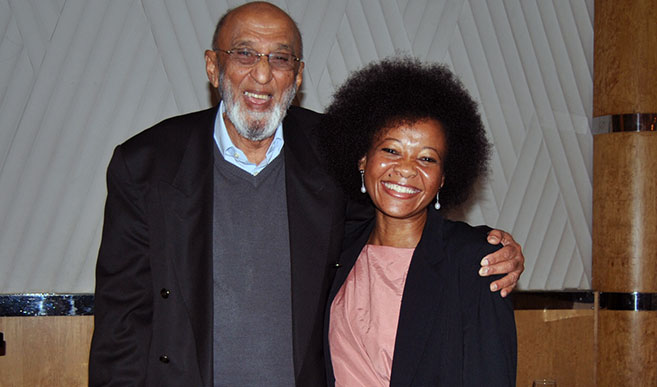 At the Medicine Update are Professor Abdul Mitha (left) and Dr Nombulelo Magula.

The event, well attended by doctors from all over South Africa, also attracted doctors from rural KwaZulu-Natal who were sponsored by the Centre for the AIDS Programme of Research in South Africa (CAPRISA).

‘All the presenters were experts in their chosen fields and their presentations were relevant and practical for practitioners,’ Magula said. ‘Presentations provided the latest information on the management of epilepsy, diabetes, kidney disease, hypertension, aging and HIV, among others.’

‘The increase in CKD prevalence is thought to be due to multiple factors including population, demographics, and a higher prevalence of diagnosed diabetes and hypertension.’

The second session which was preceded by an exhibition saw UKZN’s Department of Geriatrics HoD, Professor Bilkish Cassim deliver a highly interactive talk entitled: “Not Just Old Age: Case Presentations”.  Cassim spoke about falls suffered by the elderly and the measures used to assess the risks of falling.

Dr Halima Dawood from the Infectious Disease Department at Grey’s Hospital spoke on: “New and Emerging Treatments in HIV/AIDS”.

The annual Professor Vinod Gathiram Memorial Lecture was presented by Emeritus Professor Abdul Mitha.  Titled: “The Demise of Clinical Cardiology”, the presentation gave a detailed history of cardiology in KwaZulu-Natal, from when it began in Wentworth Hospital in 1965 to where it is today.

Magula thanked Mitha, UKZN’s former Head of Cardiology, for his contribution to the training of undergraduate, postgraduate students and specialists in cardiology. ‘The impact of his teaching abilities has been felt throughout KwaZulu-Natal and South Africa,’ said Magula.

Magula added: ‘The turn out and participation at the Symposium indicated that practitioners still see value in the Annual Medicine Update Symposium provided by UKZN’s Department of Internal Medicine.’