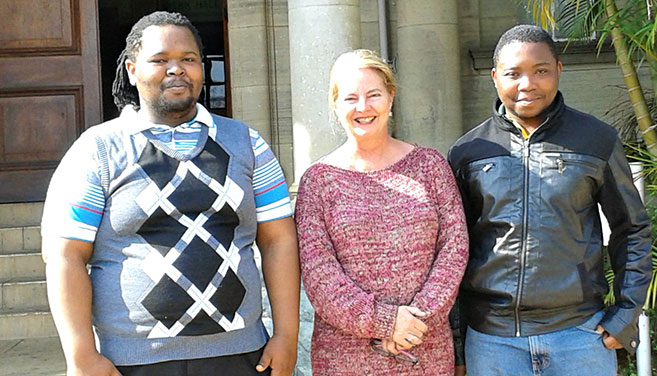 Media Lecturer Dr Nicola Jones had a bright silver lining in her day recently after she lost her car keys.

Thinking they were history she contacted her son to fetch the vehicle using the spare keys and she would walk home from the Pietermaritzburg campus later.

But she hadn’t reckoned on the good deed spirit of two Education students, Mr Siphumelele Sibutha and Mr Sibonelo Nkosi, who found the keys and went out of their way to return them.

Jones said: ‘I discovered my car keys were missing, resulting in a bit of a personal panic. I had parked in Golf Road outside Psychology, which is somewhat renowned for car theft and which also has extremely high pedestrian and vehicle traffic. I realised I had dropped the keys in the road.’

‘Fortunately, they were found later by two students who left a note on my windscreen informing me of this and giving a contact cell number. Crisis over!

‘Some may say this was a small thing to do, but these random acts of kindness are, for me, so important, particularly given the general 21st century tendency to ignore the plight of fellow human beings. Also, so often we forget to say thank you. These small deeds are part of what makes me so proud to be a UKZN Lecturer,’ said Jones.

Sibutha and Nkosi said they had no idea who the car belonged to so they had kept the keys safe and left a note on the windscreen. ‘Two hours later Dr Jones called and we returned the keys to her. There are a lot of people like us aspiring to be teachers who, through examples like this, will instill good morals in kids in the future,’ said Sibutha.

Dean and Head of the School of Education, Professor Gregory Kamwendo, said: ‘These young men give us positive hope for the future. We live in a world where “thank you” is fast becoming an endangered species! I am proud of them.’

Academic Leader for Teaching and Learning in the School, Dr Sithabile Ntombela, added: ‘This makes me think there is still hope in our country and education system.’