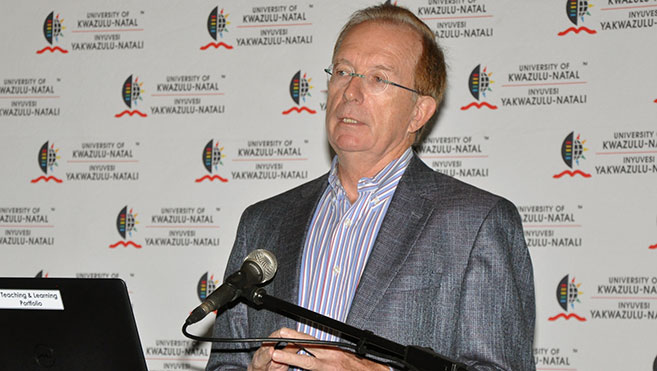 Challenge of Access to Higher Education Examined at Conference

“Challenge of Access: Praxis and Structure in Higher Education”, was the title of a keynote address at UKZN’s Teaching and Learning Conference by Wilbur-Kieffer Professor of Higher Education and Co-director of the Pullias Centre for Higher Education at the University of Southern California in the United States, Professor William G Tierney.

Tierney, whose research focuses on increasing access to Higher Education, said education was seen as a key vehicle to escape poverty.  ‘How do we get more low-income, first generation youth, into university and graduate?’

He said a truism had been that the wealthier the country was, the better developed the educational system. Referring to China, Tierney said: ‘Countries which have sought to improve their economic well-being, have invested heavily in schooling.

‘There is, in general, a common acceptance that a high school education is no longer sufficient for a society wanting high wage jobs in a global society.’

Tierney said having grit - ‘passion and perseverance for long-term goals in the face of setbacks’ - had been identified as an individual characteristic that was predictive for success.

Tierney said the role of the academic was not simply to acquiesce, but instead to ‘engage in analysis of the overall cultural politics that defines the era and proffer ways for social engagement’.

He examined the construct of ‘responsibilisation’, which he defined as assigning the burden of managing one’s risk in society entirely to the individual rather than to the state and/or the influence of institutional cultures and more broadly the role of globalisation.

Tierney extended the debate in a workshop on Creating a Culture to improve Student Performance: Increasing Access to Higher Education.

Day two at the Conference included sessions on: “The Role of Technology in a Constructivist Classroom” by ZG Baleni and “Inclusion of a Community of Practice in the Digitalization of Indigenous Knowledge” by L Sosibo and A Mwanza.