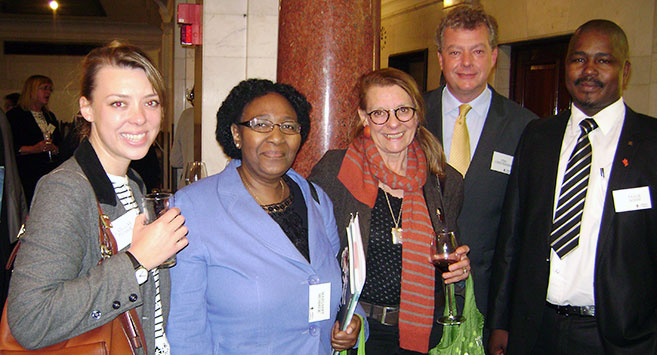 UK-based alumni and friends at the annual alumni event in London.

Annual Alumni Function back at South Africa House in London

More than 100 people attended the annual function of UKZN’s Alumnus Association in Europe in London.

Guests were thrilled to be back at South Africa House after a break of almost four years and the return of the event to the iconic building was made all the more special by the presence of the Vice-Chancellor and Principal of the University, Dr Albert van Jaarsveld, who was the guest speaker.

Chair of the Alumnus Association in Europe, Mr Bruno van Dyk, welcomed guests and thanked the previous Chair, Ms Caroline Harben, for her dedication to the Association over the past decade.

President and Chair of Convocation, Mr Fanle Sibisi, addressed the gathering, highlighting UKZN’s achievements over the past decade and stressed the need for graduates to ‘give-back’ to their alma mater.

He supported Sibisi’s plea for graduates to consider donating to the University.

Executive Director of Corporate Relations at UKZN, Mr Lesiba Seshoka, thanked everyone for attending and the speakers for their contributions.

South African canapés and drinks were served after the talks and guests were able to network and catch-up with fellow graduates.

There was a draw for prizes with UKZN Foundation gifts being handed out to eight lucky winners.

Folders with the latest UKZN information and mementos were distributed to guests.