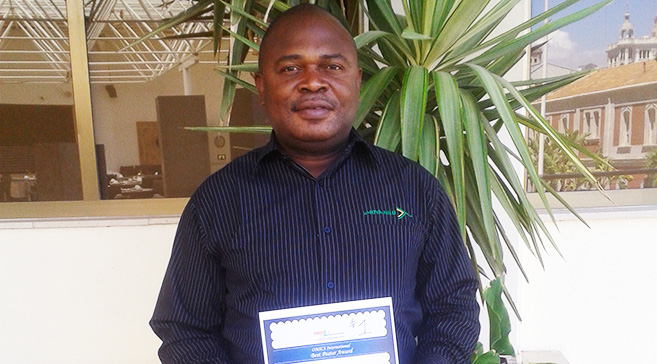 PhD candidate in the School of Chemistry and Physics, Mr Jean-Pierre Mulumba, won the prize for the best poster presentation at the 4th International Conference on Earth Science and Climate Change in Alicante, Spain.

The Conference brought together leading academics, scientists, researchers and students from the fields of geosciences, geology, meteorology, volcanology, atmospheric science, global warming, environmental sciences, remote sensing, among others in which the aim is to promote earth science education at school, college and university levels, and to the general public.

Mulumba said benefits of attending the conference included the opportunity it presented for learning and sharing knowledge on new topics.

He was impressed by a presentation on the Blue Green Dream, a new scientific concept that can help cities and countries manage scarce natural resources, and information on climate change resilience strategies from other eminent scientists.

SHADOZ is an initiative by NASA to co-ordinate information gleaned by ozonesonde stations collecting data in the subtropics and make it available through their website for research purposes.

Delegates at the conference were impressed with the quality of Mulumba’s work and pleased to see an African student attending the Conference given the challenges the continent is experiencing regarding climate change.

Mulumba, who is from the Democratic Republic of Congo, holds a BSc Honours in Meteorology from the University of Kinshasa and a Masters degree in Environmental Science from UKZN, which focused on air pollution.

He said he chose to pursue postgraduate studies at UKZN because of its reputation as a leading African university striving for excellence in science.

The aim of Mulumba’s research is to provide comprehensive characteristics of the tropospheric ozone layer over southern Africa and its effect on regional climate. He is interested in tropospheric ozone, which is a secondary pollutant generated from the reaction of primary pollutants such as carbon monoxide and nitrous dioxide from anthropogenic and natural activities and ultraviolet rays from sunlight.

‘Ozone in the troposphere is harmful for human, animal and plant health as well as the environment. It causes pulmonary diseases and has a negative impact on plant growth, and is also a greenhouse gas that has negative impact on the earth radiation budget.’

Mulumba plans to go on with research on atmospheric pollution and climate change after completing his PhD, and also hopes to lecture.

Mulumba’s supervisors are Professor Sivakumar Venkataraman of the Atmospheric Pollution Research Group in the School of Chemistry and Physics, and Professor Thomas Afullo of the School of Engineering. He thanked them for their guidance.

Mulumba’s trip was funded in part by the College of Agriculture, Engineering and Science as well as uMoya- Nilu Consulting, who sponsored his stay in Spain.