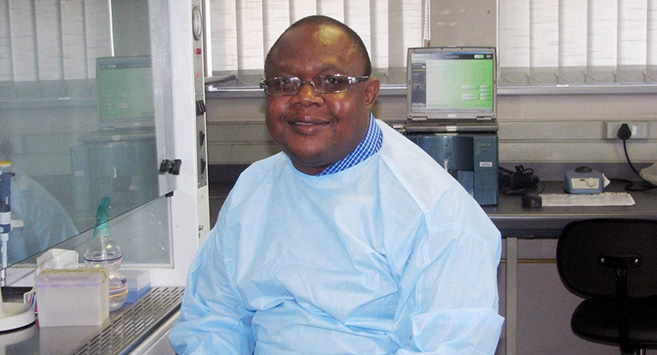 The two-year study titled: “Magnitude and Kinetics of CD8+ T Cell Activation during Hyperacute HIV Infection Impacts Viral Set Point”, was conducted in Umlazi, Durban, where Ndhlovu’s team discovered that despite HIV being characterised as an immune suppressive disease, the initial immune response to HIV infection was much larger than previously appreciated.

‘We also discovered that the strength of the initial response mediated by killer white cells called “killer lymphocytes” - also called CD8 T lymphocytes - play a crucial role in controlling HIV replication during the early phase of the disease,’ said Ndhlovu. ‘More importantly we discovered that the reason the initial immune response fails to completely eliminate the virus is because HIV induced killer lymphocyte die before completely eliminating HIV infected cells allowing the disease to progress.’

Ndhlovu said: ‘To have a paper published in such an important journal is an endorsement of the significance of my discovery by the wider scientific community. This is a great achievement not only for me and my team but for UKZN as well.’

Ndhlovu worked on the study with HPP Scientific Director, Professor Thumbi Ndungu, and HPP Principal Investigator, Professor Bruce Walker, from Harvard University as part of the larger longitudinal work to identify and analyse people immediately after they are infected with HIV.

‘The study is called FRESH, which stands for Females Rising through Education, Support and Health, and has two interlinked objectives. The intensive 12-month core training programme aims to adequately empower participants to gain and keep meaningful employment education as well as to screen participants twice for evidence of acute HIV infection.’

Ndhlovu said he was passionate about contributing to the fight against HIV because despite considerable prevention efforts, new HIV transmissions continued to establish life-long infections.

‘The ultimate goal of ending the HIV epidemic will require development of an effective and affordable HIV vaccine. By investigating how HIV attacks the body and how the body defends itself, my research seeks to identify molecular targets that can be exploited for a rationally designed HIV vaccines,’ Ndhlovu said.

Ndhlovu is an Instructor in Medicine at the Ragon Institute of Massachusatts General Hospital, the Massachusetts Institute of Technology and Harvard Medical School. He said his research interests included other infectious diseases such as TB and malaria.

His team acknowledged FRESH participants, international funders, and the FRESH and HPP laboratory staff who all helped make the study a success.