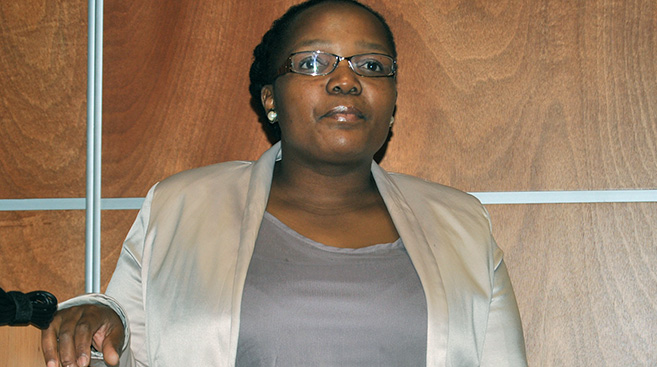 A Lecturer in the HIV Pathogenesis Programme in the School of Laboratory Medicine and Medical Sciences, Ms Bongiwe Ndlovu, won second prize at the annual CHS Research Symposium for her study titled: “Evolution of Neutralising Antibodies in HIV-1 Subtype C Infection”.

She said: ‘The study highlights important aspects in the development of neutralising antibodies which could contribute in the design of an antibody-based vaccine.’

According to Ndlovu, broadly neutralising antibodies are rare antibodies found in between 20% to 30% of HIV-1 infected people. ‘These antibodies bind to diverse virus strains and block HIV-1 infection, thus they can be used to provide sterilizing immunity,’ she explained.

The study screened a group of HIV-1 infected individuals in Durban and identified 4/20 people who developed broadly neutralising antibodies. These individuals were then analysed retrospectively and the researchers found that these antibodies developed about a year after HIV-infection.

‘We mapped the epitopes targeted by these antibodies and found that they target glycans at position 276 and 332 of the V2 and V3 loop on the viral envelope respectively,’ said Ndlovu.

Further studies are underway to discover why these individuals developed the broadly neutralising antibodies and whether the virus could develop ways of evading these antibodies.

Ndlovu spent three months at National Institute of Communicable Diseases in Johannesburg, learning neutralising antibody techniques. She is grateful to her supervisor Professor Thumbi Ndung’u and his collaborators, Professor Lynn Morris and Professor Penny Moore for their guidance and support.

Ndlovu enjoys teaching, research, reading books and spending time with her family. ‘My faith in God keeps me going. I believe that he has a plan for our lives. Martin Luther King Jr once said “Faith is taking the first step even when you can’t see the whole staircase”.’

She previously won the Women in Science PhD fellowship award from the Department of Science and Technology (2012).