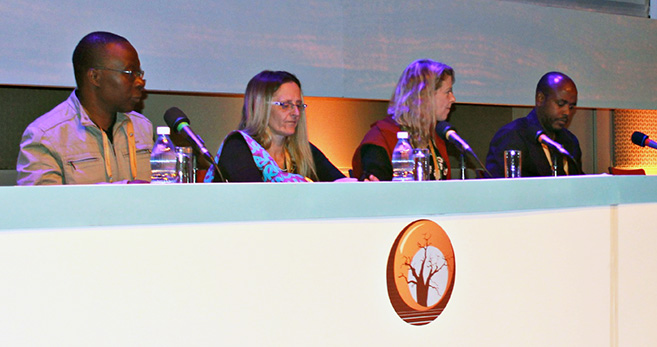 Academics and students from UKZN’s College of Humanities played an important role in the success of the 2015 World Social Science Forum held at the International Convention Centre (ICC) in Durban.

Representatives of the University, which is a consortium partner of the WSSF, were on the local organising committee for the event.

Deputy Vice-Chancellor and Head of the College of Humanities, Professor Cheryl Potgieter, who chaired a session on Gender and Development, joined forces with the Dean of Research, Professor Urmilla Bob, for a presentation titled: “Assessing the Environment for Social Science Research: The Case of South Africa”.

Director of UKZN’s Centre for Civil Society (CCS), Professor Patrick Bond, chaired a session on Inequalities in Post-Apartheid South Africa and presented on the topic: “Durban’s Contested Infrastructure, Society, Economy and Ecology”, while Professor Brij Maharaj presented on: “The Quick Fix? Social and Economic Impacts of Mega-Events in South Africa”.

Ms Catherine Sutherland and Professor Dianne Scott focused on: “Durban, an African Post-Metropolis: Implications for Urban Policy and Practice in the City”; while Senior Politics Lecturer, Dr Lubna Nadvi, gave a poster presentation on “Apartheid still Exists in the Middle East: The Role of South Africa in Ending the Occupation of and Socio Economic Inequality in Palestine through Boycott, Divestment and Sanctions (BDS)”.

Education academic, Professor Relebohile Moletsane, chaired a session on “Analysing the Obstacles - What is Structural and What is Personal? Initial Findings from a Longitudinal Study on Student Success in South African Universities”.

One of the plenary sessions led to discussions emerging under the topic: “Knowledge, Power, Space: Narratives from Africa presented by a panel of UKZN academics”.

The challenges discussed were inequality, poverty, and environmental ruination which are informed by various epistemologies, embedding various power, social, cultural, and economic relations.

According to the panellists, the ramifications are consequently, central rather than remote to everyday existence. This complexity is interrogated from social science, political science and political ecology/natural science perspectives.

Dean and Head of the School of Applied Human Sciences, Professor Nhlanhla Mkhize, spoke on “Infusing African Perspectives into Social Sciences and Humanities, emphasising he felt the social sciences in Africa have historically relied on foreign paradigms, and epistemologies. ‘African perspectives on the social sciences remain on the margins of academic scholarship and research,’ he said.

Mkhize provided an overview of contributions of indigenous perspectives towards the social sciences.  ‘In recognition of the plural and multi-vocal nature of the knowledge domain, the project to develop Indigenous Knowledge Systems (IKS) cannot be meaningfully pursued without taking cognisance of local languages, as it is in these languages that the cognitive, philosophical, and other frameworks of the local people are embedded. African languages and IKS are indispensable to the transformation of the Higher Education landscape.’

UKZN Senior Political Science Lecturer Dr Suzanne Francis discussed the ways in which studies neglect to consider the politics and ethics that underpin the process of knowledge production in post-conflict African states.

Posing a series of powerful ethical questions, Dr Francis said that ‘there is an urgent need for political scientists to put theories of the African state into the methodology through which knowledge is produced on Africa. If the theories of the state differ, then so does the process of knowledge production.’

She offered an alternative way to think about the elite interview in the African State and said, ‘What we do and the ways that we do it are decidedly political and ethical acts. Theorising questions of ethics, power and political space in the process of knowledge production is what makes our research valid.’

They looked at global policy agendas, including the Green Climate Fund, Green Bonds, the assembly of the

“entrepreneurial self” and the financialisation of climate change, noting that a new power knowledge system was needed.

Speaking about the Governance of Poverty using the water sector as a lens, Dr Sagie Narsiah of the School of Social Sciences said: ‘Knowledge(s) applied geographically and spatially are in many ways crucial to the exercise of power and rule over the poor, in a phrase, poverty governance.’