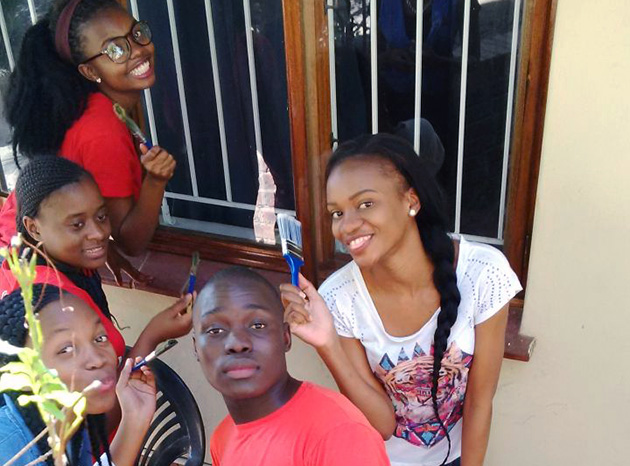 Pharmacy students brings smiles to the faces of children at the home.

Every child deserves to be happy, to be loved, to have fun and to grow in all aspects of their lives, says UKZN Pharmacy student, Mr Zethembe Mfeka.

Mfeka was one of 28 UKZN Association for Pharmacy Students (UKNAPS) who embarked on a charity drive to Vukukhanye Children’s Home in Durban for a day of fun and recreation.

UKNAPS raised funds and donated old books, non-perishable food and clothing to the home, in addition to educating the youngsters about nutrition and healthy lifestyle, the dangers of risky behaviour, and offering career guidance.

The students enjoyed playing netball, soccer and a host of activities including being on the jungle gym and trampoline and painting the facility’s door and window frames.

Now in his third-year of the Bachelor of Pharmacy degree, Mfeka said he believed every child, including orphans, deserved the opportunity to realise their full potential.

The home operates and supports community-based development projects aimed at the care of orphans and vulnerable children as well as the continued development of the historically-disadvantaged community of Chesterville in Cato Manor.

Members of the UKNAPS Exco said they felt it was important to build childhood memories that would never be forgotten. ‘Our passion is in offering happiness, love, fun and growth to the children who need it the most.’

‘By visiting Vukukhanye Children’s as Pharmacy students, we believe that we have planted a seed into the children’s hearts that will grow into useful fruits.’