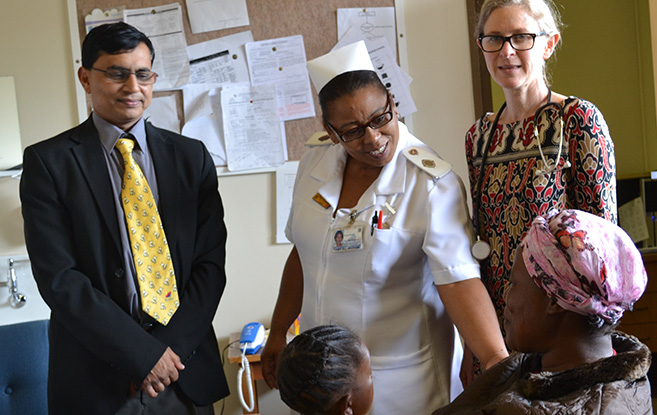 A Day in the Life of a UKZN Paediatric Nephrologist

PRO at UKZN’s College of Health Sciences, Nombuso Dlamini, accompanied Professor Rajendra Bhimma during one of his visits to the Grey’s Hospital Renal Clinic in Pietermaritzburg.  This is her story:

If you like the TV medical series, Dr House, you would have enjoyed watching UKZN’s Professor Rajendra Bhimma get to work at the Paediatric Renal Clinic at Grey’s Hospital in Pietermaritzburg during an outreach programme.

Once every three months, Bhimma visits the clinic to help doctors treat children with difficult and complicated kidney diseases.

‘These visits also help reduce the referral rate to Inkosi Albert Luthuli Central Hospital (IALCH) where only six beds are allocated for children with complex and severe kidney disease,’ Bhimma told me. ‘So this helps both doctors and patients because it brings these services closer to home.’

While he would like to increase the frequency of his visits to the clinic, it is a luxury he cannot afford as there are staffing constraints.

When Bhimma walked into the hospital, consultants and registrars were waiting for him, files on hand. As a Paediatric Nephrologist, Bhimma specialises in young patients ranging in age from birth to adolescence.

HoD of the Renal Clinic at Greys Hospital, Dr  S Harris, said most of the patients Bhimma treated were from local and surrounding areas, including Greytown, Underberg, Dundee, and sometimes further afield because Grey’s is the only tertiary referral hospital in the KwaZulu-Natal Midlands.

The Clinic is run weekly by Harris and Dr M Suliman who earmark complex cases for Bhimma when he visits the renal clinic.

‘Professor Bhimma looks at about five to 10 patients if it is not too busy, but the numbers sometimes go up to 20,’ said Harris.

As soon as we arrived at the hospital, Suliman presented her complicated cases to Bhimma so he could advise on further treatment. Bhimma quickly offered expert advice, also prescribing the required treatment. He did not only offer medical advice, but provided advice on how to counsel the family.

On the morning we were there, he focused on five patients presented by Suliman who were suffering with complications.

He also saw young sufferers attending the outpatients’ clinic, including a 10-year-old who physically resembled a three year old due to her growth being severely stunted from a chronic kidney disease.  The child was brought in by her grandmother and had a complicated liver and kidney problem with multiple cysts in both organs.

Harris said the child had been lost in the system as the family did not follow up for three years because the youngster had been abandoned by her mother.

A six-year-old girl from Nquthu arrived with her father. Her kidneys were losing phosphate due to a rare condition known as the Fanconi Syndrome. Now that she is on appropriate treatment, she is able to walk without support and her height is slowly improving although Bhimma pointed out that she will have better height gain if she were on Growth Hormone. However due to high cost of this treatment, it is not available for the use in children for this indication in the public sector.

An 11-year-old girl from Tugela Ferry was treated by Bhimma at IALCH and then transferred to Grey’s Hospital to continue treatment. She was with her mother who was excited to get a chance to communicate with Bhimma and get more clarity on her child’s problem.

Bhimma then visited a neonate in the Intensive Care Unit who was born with a complicated kidney impairment and needed peritoneal dialysis as her kidneys were no longer functioning.

As a non-medical person, I was awe-struck by the spectrum of kidney diseases I saw in children during the two hours I accompanied Bhimma. It never occurred to me that children could be afflicted so severely by kidney disease which is almost unheard of compared to respiratory infections and diarrhoea. It is heart-warming to know that with appropriate treatment many of these children can survive to adulthood and that even dialysis and transplantation are possible.