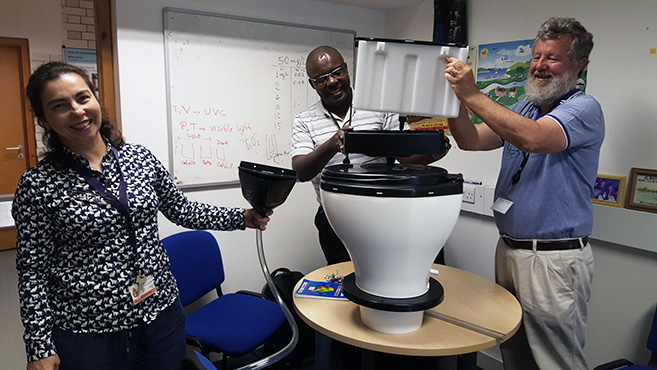 Researchers from UKZN’s Schools of Chemical Engineering and Agricultural, Earth and Environmental Sciences (SAEES) travelled to the University College London (UCL) for a visit made possible by the Royal Society Newton Grant which has been awarded for a two-year period to researchers from both institutions.

UKZN’s Professor Chris Buckley and Dr Alfred Odindo travelled to UCL where they were hosted for a week by Dr Luiza Campos and Dr Priti Parikh. The duo took along one of the urine-diverting dry toilets being used in research by Buckley’s Pollution Research Group (PRG).

The toilet is designed to separate waste and recover nutrients from it for various uses, including the manufacture of fertilisers using the resources from waste which would otherwise have contributed to water treatment costs, water wastage and pollution.

Buckley and Odindo’s work is part of the Valorisation of Urine Nutrients in Africa (VUNA) project managed by the Swiss Federal Institute of Aquatic Science and Technology (Eawag) and funded by the Bill & Melinda Gates Foundation- in partnership with the eThekwini Water and Sanitation Utility (EWS) The project is designed to improve sanitation for those in the larger Durban area while also promoting eco-friendly ways of managing waste.

While Buckley and his team focus on how waste is processed, Odindo works on the agricultural side to test the value of the nutrients for use as fertilisers. This work aligns with that of Dr Priti Parikh of UCL, whose research has focused on slum resettlement and housing and upgrading with a particular focus on nature-sensitive infrastructure such as waste, energy, water, sanitation and roads. Additionally, an Environmental Engineer at UCL, Dr Luiza Campos, will contribute her expertise on water and sanitation, fields where she covers issues ranging from process modelling to sustainable and resilient sanitation services.

The Royal Society Grant was awarded to facilitate visits between Odindo and Parikh and their respective teams to explore opportunities for building lasting networks and strengthening emerging collaborations. Odindo and Parikh hope that these visits will build towards research which will investigate the potential for the use of Decentralised Waste Treatment Systems (DEWATS) and pre-requisites in the supply chain for waste management in peri-urban settlements in South Africa to address the gap in sanitation provision.

The team also plans to use the research to link agriculture to innovative sanitation technologies.

The visit was a productive one resulting in several ideas for research collaborations and joint grant proposals as well as the sharing of networks to enhance the knowledge of both institutions. Odindo mentioned that, since the grant was awarded in January, the group had already come up with two research proposals which they looked forward to expanding as the partnership continued and grew.