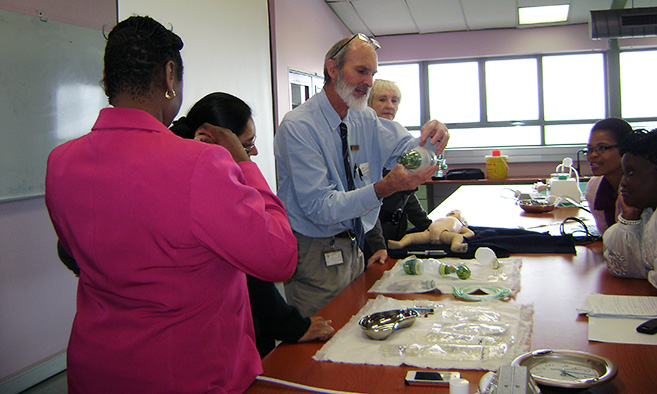 KwaZulu-Natal has the country’s highest number of health professionals being trained as ‘Master Trainers’  in the management of pregnancy related emergencies - a programme funded by UKZN’s Medical Education Partnership Initiative (MEPI).

The training, a nationally standardised programme known as Essential Steps in Managing Obstetric Emergencies (ESMOE), has produced more than 350 ‘ESMOE Master Trainers’ from public health facilities across the province, including hospitals providing a maternity service, and most community health centres.

ESMOE training has contributed towards efforts to reduce maternal mortality rates which have declined by 483 (27%) deaths nationally over the past four years.

‘The success of the programme on this scale can now also be used as a blueprint for other provinces to follow as it speeds up the implementation of one of the recommendations from the Confidential Enquiries into Maternal Deaths report which calls for the strengthening of training health professionals in the clinical management of emergencies during pregnancy including resuscitative skills.’

Another key driver in escalating the training of health professionals is concern at the number of women dying of blood loss during caesarean deliveries, especially within KwaZulu-Natal, with its largely rural population.

According to recent findings in the Saving Mother’s Report into Maternal Deaths, the mortality rate of women having caesarean deliveries as a result pregnancy related complications is three times higher than those having normal deliveries.

More awareness of maternal care from a health professional and patient perspective results in less risk of complications for the mother and her baby,’ said Moodley.

‘The ESMOE programme demonstrates that much more can be achieved through partnerships. We cannot expect government to do all the work when our country requires a joint effort to make a difference in all areas of service delivery, including health care. The partnership involving the provincial Department of Health, UKZN and MEPI proves that together we can achieve a lot more in capacity building at all levels especially where lives depend on it.’

•   Standardised observation and monitoring practices in the early detection of shock due to excessive bleeding (where the body begins to shut down due to excessive blood loss) following delivery and during and after Caesarean delivery.

•   Ability to deal with the complications associated with high blood pressure occurring in pregnancy.

•   Improvement in anaesthetic skills in deliveries.

•   Training in HIV advice, diagnosis and treatment of respiratory infections in pregnant women and newborn babies.

In a further effort to reduce maternal mortality rates, all medical interns are now expected to complete the ESMOE course before being allowed to register as community service doctors while existing doctors at public health facilities may also be formally assessed in their competency to perform Caesarean deliveries  before being allowed to manage or conduct Caesarean section independently.

MEPI is funded by the United States agency, the National Institute of Health (NIH), which is the largest source of funding for medical research in the world.

Zohra Teke
In This Issue