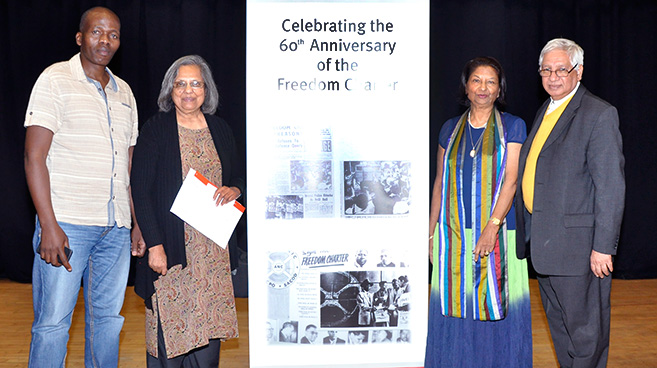 The 60th anniversary of the Freedom Charter and the valuable documents archived at the University were the focus of UKZN’s Special Collections Open Day on the Westville campus.

In his welcome address, Deputy Vice-Chancellor, Research, Professor Jonathan Blackledge, said the Freedom Charter was an iconic document in the struggle for South African freedom. ‘It declared the constitutional and human rights aspirations of the broadest section of the South African people,’ said Blackledge.

‘Building unity remains the glue that holds the South African nation together.’

Blackledge paid tribute to those who played a role in securing the country’s liberation, including Professor ZK Matthews, Oliver Tambo, Lilian Ngoyi and Phyllis Naidoo.

‘By honouring the Freedom Charter through this Special Collections Open Day, I trust that the University has played a small part in honouring those who fought for South Africa’s freedom and those who continue to work for peace, non-racialism, social cohesion and the development of all South Africa’s people,’ he said.

Dr Ela Gandhi, Mahatma Gandhi’s granddaughter, delivered a keynote address tracing how the Gandhi-Luthuli Documentation Centre was named in honour of the province’s two leading peace icons.  Gandhi said there had been discussions on the possibility of a new dispensation in South Africa and the role universities could play at the ANC’s first conference in the country since its banning in 1960, hosted at the then University of Durban-Westville in 1991.

Key issues raised included the need to build national unity from a divided and fragmented society and to bring the races together. ‘There was a need to build peace and non-violence, especially in KwaZulu-Natal,’ said Gandhi. She added the history of the struggle for South African freedom had not been adequately captured.

Both Mahatma Gandhi and Chief Albert Luthuli, former President of the ANC, were acknowledged for their commitment to non-violence. The Gandhi Luthuli Documentation Centre was formed to ‘build social cohesion and promote non-violence,’ she said.

Retired academic from UKZN’s Faculty of Education, Professor Betty Govinden, recited a poem, paying tribute to women who had played major roles in the liberation movement.

Nokutela Dube, the wife of John Dube - the founding President of the ANC; Bessie Head; Phyllis Naidoo, and Ela Gandhi, among others, featured in the poem, which paid tribute to women who had gone ‘before us and have left a legacy in whose footsteps we tread’.

UKZN’s Dr Bheki Mngomezulu reflected on the Freedom Charter and suggested there was a need to revisit and publicise it.

Mngomezulu emphasised the importance for the document to be studied especially by politicians and the youth.

Umgungundlovu District Mayor Mr Yusuf Bhamjee said the Freedom Charter was a ‘living document. Madiba was a son of the Freedom Charter. When Chris Hani was assassinated, Madiba had two choices. He could have said “Burn South Africa! Burn!”, but rather said: “No, South Africa belongs to all who live in it, let us put down our weapons and build the nation”.’

Encouraging the documentation of our country’s history, Bhamjee addressed young people present saying: ‘If you don’t look after our history, nobody will.’

In a message read on his behalf, KwaZulu-Natal MEC for Human Settlements and Public Works, Mr Ravi Pillay MPL, commended the library for hosting the Special Collections Open Day. ‘It is especially significant that you have selected to highlight 60 years of the Freedom Charter as the theme.

‘No other document captures the essence of how far we have come as a nation as clearly as the Freedom Charter. The doors of education and culture are indeed open to all,’ said Pillay.

He also congratulated the University library on its archival, preservation and public education initiatives and the University’s contribution to building unity, non-racialism and social cohesion.

The Programme Director on the day was Dr Sershen Naidoo of the School of Biological Sciences, while the Head of the Killie Cambell Library, Mr Vincent Buthelezi, delivered the vote of thanks.