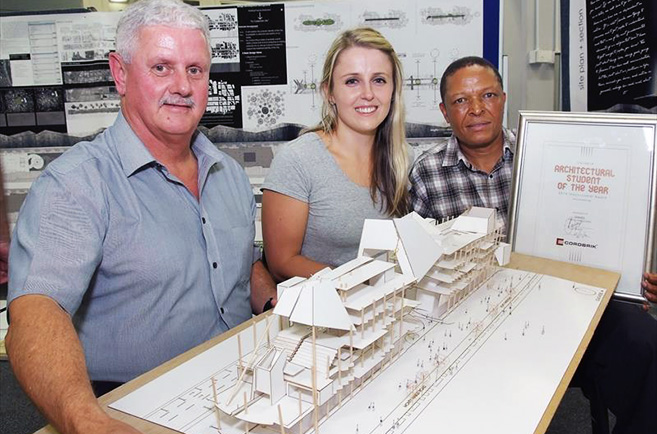 Stevens was the only student selected to represent UKZN and won a cash prize of R8 000.

The prestigious annual awards highlight the creative and technical talent of South Africa’s top architectural students and are aimed at promoting the advancement of design excellence nationally.

Stevens’s thesis explores the significance of the cosmos in relation to death and its space making principles of the Shembe Church. She proposes a cemetery complex to “Celebrate Life” in the City of Durban.

The project uses a Shembe principle of “reclaiming lost space” through the adaptive reuse of the existing Nicol Square parkade.

‘In South African society, colonisation interrupted what might have been our ‘great African connection’ between architecture and larger forces of influence.’

Stevens proposed introducing a symbol into the centre of the city, which will demonstrate the relationship between African spirituality and South African society, and redefining the identity of Durban as an African city.

She is currently a candidate architect for the South African-based firm SAOTA, a studio of architectural designers and technicians.