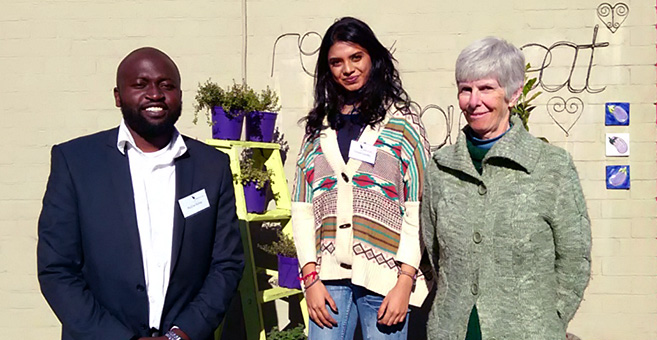 Winners of the 2014 Short Story competition organised by short term insurance broker, Indwe Risk Services, in partnership with the Alumni Relations Office, have been announced.

UKZN alumni had been invited to submit entries for the competition which had a theme of: “Under an African Sky.”

Entries were received from within South Africa and internationally with prize-money totalling R14 000 up for grabs.

Two of the three winners were present when the results were announced at a lunchtime function at the Fat Aubergine in Pietermaritzburg.

Winner of the first prize of R8 000 was Mr Jonathan Hemmings, a College of Humanities graduate with a master’s degree from UKZN.  Hemmings, currently based overseas, was represented at the event by his parents.

Second prize of R4 000 went to Mr Kudzai Kehle and third prize of R2 000 was awarded to Ms Prinola Moodley.  Both Kehle and Moodley are from the College of Law and Management Studies and have studied at undergraduate and postgraduate levels at UKZN.