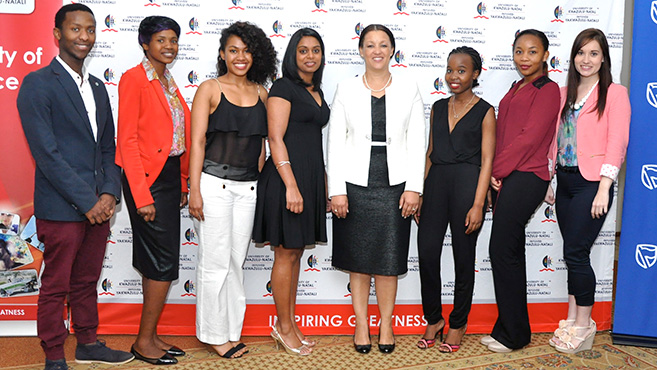 This year 112 golfers teed off to raise funds for students from previously disadvantaged backgrounds who have excelled academically.

Williamson thanked all participants, saying their contributions were highly appreciated.

Standard Bank, the main sponsor of the event for the past few years, has contributed more than R300 000 to UKZN golf days, including the Extended Learning Golf Day.

At the handover of the bursaries, Mr Themba Rikhotso of Standard Bank urged the students to give off their best in their studies.

Rikhotso said UKZN’s Golf Day represented a lot of hope for the country and the Bank was happy to have further renewed this hope with its sponsorship.

‘Standard Bank is proud to be associated with this bursary fund-raising event, an association now in its sixth year.  The fact that this event supports students who excel and who come from disadvantaged backgrounds makes us as a Bank a proud lead sponsor.’

Bursary recipients and Speech Language Pathology students, Ms Fiona Naidoo and Ms Kimberlee Sykes, both expressed their appreciation to the University for the contribution to their fees, stressing that they could now concentrate on their studies.

Speaking on behalf of all the recipients, Bachelor of Arts student, Ms Sadé Wagner, thanked the golfers and sponsors for helping to make the bursaries possible.  She said the way for students to show their true appreciation was to achieve good marks.