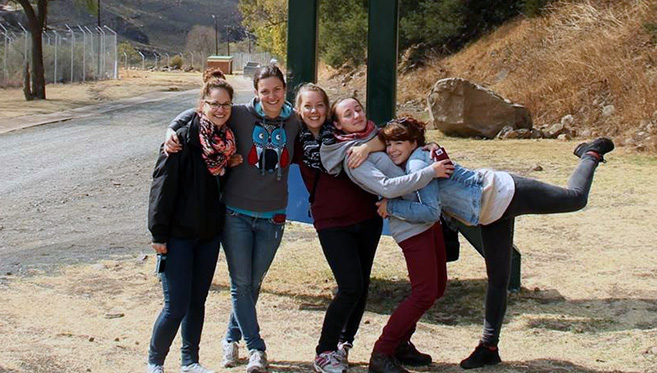 UKZN exchange student Claire Puntous (right) with colleagues (from left) Anne-Maria, Kim, Katrin, and Veronika, during one of their many adventures in South Africa.

French exchange student Ms Claire Puntous arrived at UKZN in July last year to continue her honours studies in Linguistics.  She happily served on the Student Chapter handling the photography at a variety of Chapter events.

Here, Puntous tells us a bit about herself and her year at UKZN in a Q & A interview shortly before she returned to France:

Q: Where did you grow up and study?

A: I’m from a small city called Le Puy en Velay in France. I studied in a bigger city called Lyon, at the University Jean Moulin - Lyon 3 where I did a Bachelor’s degree in English Literature, History, Translation and Linguistics.

Q: Why did you choose to study in South Africa?

A: I’ve dreamed about studying abroad since I was eight years old when I saw a French film L’Auberge Espagnole in which the main character studies in Spain for a year. My university in Lyon gave me the opportunity to fulfil that dream, so I seized it. I had to study in an English-speaking country due to my studies. I could have gone to the USA, Australia, or the UK and so on, but I was not so interested in going to these countries since France shares so many similarities with them. I wanted to see something radically different. South Africa was the perfect destination to learn about other ways of thinking, other ways of life.

Q: What did you research while at UKZN?

A:  I focused on Linguistics. During the second semester I studied Psycholinguistics where you learn about language and how it works with the brain. I also did Sociolinguistics which relates more to social issues.

We had to conduct a small research project and focus on UKZN and its language policy. Language policy is all the measures applied which determine the languages that have to be used and taught. For example, UKZN is trying to promote bilingualism because the government wants all the universities to promote multilingualism to be representative (and more democratic) of the linguistic diversity of South Africa.

A: In my opinion, promoting African languages is the basis for African development in general. If you continue to use the ex-colonial languages like English and French then Africa cannot really develop properly - there will always be hierarchy imposed by the ex-colonial country. All powerful countries use their own language, not a foreign one.

Again, African languages create a sense of unity with the rest of Africa. For example, UKZN is implementing Sesotho gradually to try to be at one with neighbouring Lesotho. And also Swahili because it is the most common indigenous language in Africa.

Starting to learn a language is also learning about another culture, other people’s way of thinking. Language is representative of a person. If you start learning another person’s language you start to understand your neighbour better. So in that sense learning African languages is a way of fighting against xenophobia.  Also, the good thing with South African languages is they are not that hard to learn because most of them are from the same family (the Nguni language) and people are from the same roots so they need to learn languages to remind them that they come from the same place.

Q: What have you learned in South Africa?

A: I have learned that racism is very subtle, it is not necessarily obvious. I am not a racist person, I come from a family where racism has always been fought. But at the same time I realised that sometimes, when you don’t understand some traditions or attitudes because they are different from yours, it is very easy to explain it with a racist theory. Racism is fuelled by ignorance. To my own surprise, I realised that I sometimes used to make these kinds of short-cuts in my head, which is terribly dangerous.

I come from a place where people are very pessimistic, they are not very hopeful for the future, they are very negative. I have learned here that that there is always a plan, you can always find a solution to a problem. People here experience a lot more difficulties, racism, crime, deaths… but I feel like they are also more are optimistic than us, French people. They have more hope in general. So I learned that there is always a way to solve problems and that if I am unhappy I can change that and make myself happy.

Q: What did you enjoy in South Africa?

A: I am very grateful, because I have been able to travel a lot and many people in this country have not seen half of what I have seen. People do not have opportunity to travel a lot here so I feel for them because their country is beautiful. I have been to Cape Town and Johannesburg; I have seen rural areas like the Wild Coast and went to a traditional wedding. I also stayed at the University residence where I met so many great people from various backgrounds. People here are very friendly. It’s been a great experience.