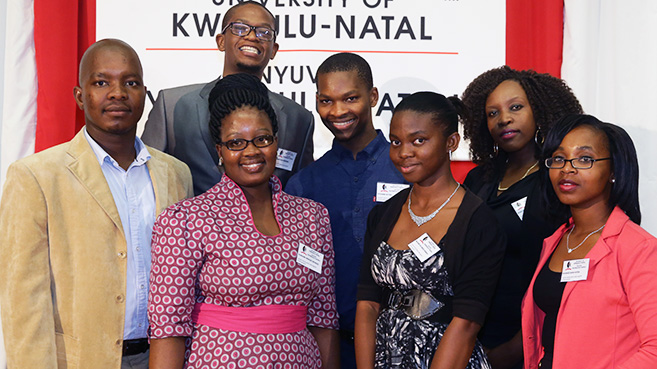 Eight top black students have been awarded the Talent Excellence and Equity Acceleration (TEAEA) Scholarship launched specifically for those intending to pursue an academic career at UKZN.

This new Scholarship - which forms part of Human Resources’ Graduate Development Programme - is funded by the University to enable it to grow the next generation of academics by identifying potential talent in the final years of undergraduate study and at postgraduate levels.

A congratulatory lunch was held by the Human Resources Development team together the HR Managers from each of the four Colleges to welcome the students.

Van Jaarsveld advised the students to live the five values of UKZN - respect, excellence, accountability, client orientation and honesty (REACH) - as this would affect the way in which they engaged with staff and students.

However, he warned them about challenges ahead which included hard work, dedication and ambition. He said the results would match what they put in. ‘Commitment will be your biggest factor - 99% perspiration and 1% inspiration.

‘I wish all of you well. Our doors are open. I look forward to seeing you at our Annual Research Awards ceremony 10 years down the line,’ said Van Jaarsveld.

Executive Director: Human Resources (HR), Ms Avril Williamson said the University aims in “Growing their own Timber”. She said 16 students will be recruited over the next five years.

HR Development’s Director, Ms Busisiwe Ramabodu said another aim of the programme is to increase the number of Black professors at UKZN, and for the University to remain in the top three universities in the country. She reminded the students that they were now ambassadors of UKZN.

A PhD in Microbiology student and recipient of a Scholarship, Ms Nontobeko Mvubu, thanked the University. ‘This is exactly what I needed. This will get me where I am supposed to be.’

Mvubu said she always wanted to be an academic and had never seen working outside of the University as an option. She attributed her success to her supervisors who kept pushing her to persevere, and her father who always encouraged his children to get educated.