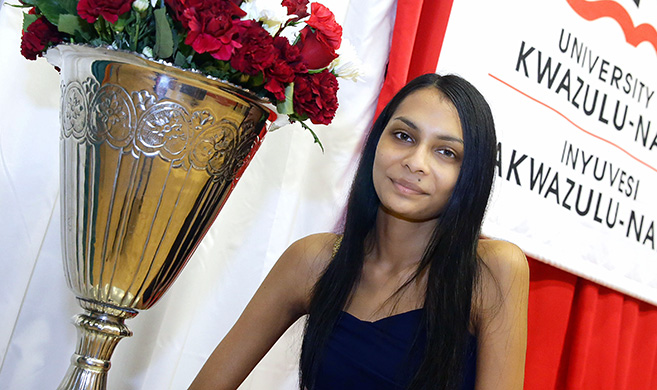 Ms Kimberleigh Bianca Govender of the School of Chemistry and Physics is the recipient of the Zac Yacoob Scholarship and the Maryam Babangida Scholarship which are awarded to students in postgraduate studies for outstanding performance and being top ranked in the College or the entire University.

The Zac Yacoob scholarship was named after Judge Zakeria (ZAC) Yacoob, a former Constitutional Court judge and the last Chancellor of the former University of Durban-Westville.

Govender won the award on the basis of her being the best Honours-level (4th year) student at UKZN.

The Scholarship is awarded each year to the best female student, in the entire University, proceeding from undergraduate to honours study.

‘I see the scholarships as motivation to complete my honours degree as I strive to ensure that I live up to the expectations that go with winning the awards which I believe are acknowledgement of the hard work, dedication and time I have invested in my undergraduate degree.’

Academic Learner, Teaching and Learning, Dr Naven Chetty, said: ‘Ms Govender is an outstanding candidate whose results are very impressive. Her 2014 results ranked her as the top student in chemistry and applied chemistry. She received three awards at the annual college awards ceremony for her academic achievements including the prestigious Lucas Trophy for being the outstanding overall Chemistry student in 2014. Her results are most impressive and rank her in the top 5% of her peers.’

Govender added: ‘After completion of this degree I hope to further my studies in the field of Forensic Science.’

Her heartfelt message to the donors was: ‘I want to convey my greatest appreciation to you for having selected me for this award as I know how competitive the world of academia is.’