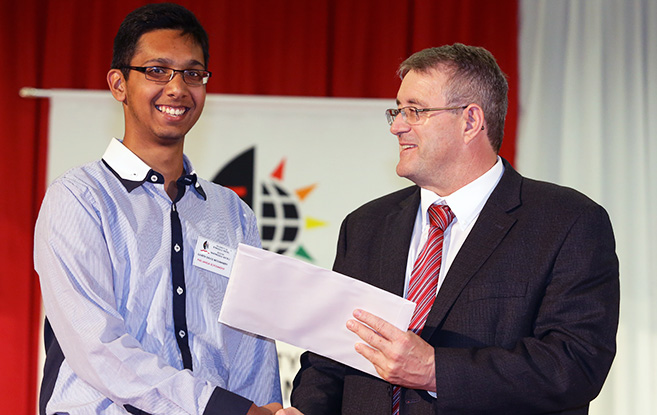 Bachelor of Medicine student, Mr Gareth Mogambery (left) is the recipient of the Pius Langa Scholarship.

‘I’m extremely grateful that I am able to study towards a degree of my choice, without having to worry about funding. My family is happy and honoured, especially my mother,’ he said after receiving the award.

The scholarship, awarded to top performing new undergraduate entrants, is named after the renowned former Chief Justice of South Africa, the last Chancellor of the University of Natal and the first Ombud of UKZN.

Mogambery said the accolade meant that his aged father did not have to use money from his pension fund to pay for fees. ‘I hope to keep the scholarship in my future years of study and to become a good doctor,’ he added.

According to Mogambery perseverance is key, ‘Hard work does pay off, and ultimately, God is in control.’

He said he was grateful to the funders of the scholarship, ‘Thank you very much for this amazing opportunity.’

Mogambery lives at home with his parents and young sister who is in Grade 11.  His two elder sisters are both doctors and UKZN alumni. He said his family enabled him to succeed and instilled in him the core values of diligence, perseverance and his faith in God.

‘I’m an avid reader and enjoy music,’ he said.  He teaches Sunday school at his church and is currently a research placement at CAPRISA.