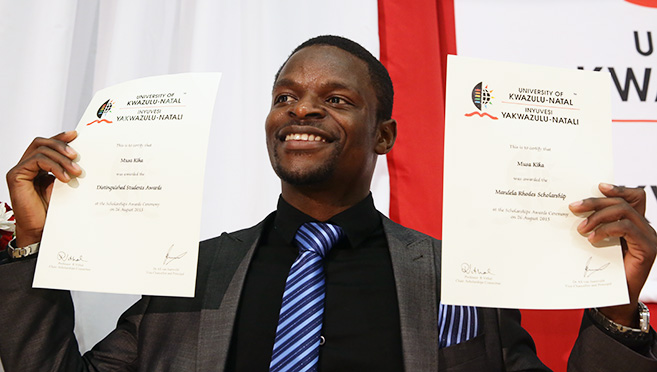 Top academic achievement is nothing unusual for Law graduate, Mr Musa Kika, who received both the UKZN’s Distinguished Student Award and the Mandela-Rhodes Scholarship at the recent Scholarship Awards Ceremony.

To Kika, receiving the accolades - especially the Distinguished Student Award which is the highest honour a student can attain at UKZN for academic excellence, university service and extensive community engagement - is motivation to continue inspiring others.

‘I realise I have a responsibility to use what I have achieved, and the skills that I have learnt to help those around me that need assistance,’ said Kika.

‘It is a responsibility and I am aware that some people look up to me. In the same vein, this award also means I have succeeded as a role model for others who are inspired by my achievements. I am now determined to achieve even more.’

Kika, who graduated with his LLB in 2015, is currently employed as an Assistant Researcher at the Democratic Governance and Rights Unit (DGRU) in the Public Law Department at the University of Cape Town (UCT) where he is also studying towards an LLM in Public Law, and will be leaving for the Supreme Court in Namibia next month to clerk for Chief Justice Peter Shivute.