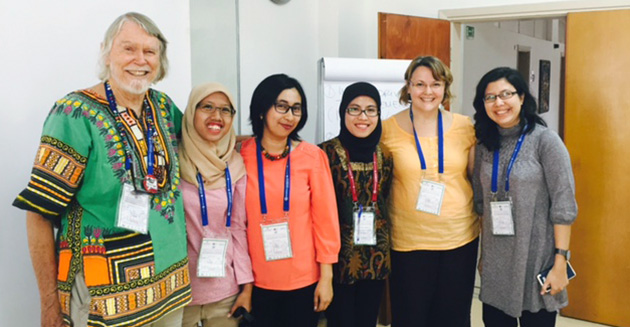 Professor David McQuoid-Mason and Mariana Berbec-Rostov, the President of GAJE, with the Indonesian delegation.

UKZN was well represented with three academics making an impact at the 8th Global Alliance for Justice Education (GAJE) World-wide Conference in Eskesehir, Turkey, which had as its theme: “Justice Education for a Just Society.”

In attendance from the University were Dean of the School of Law, Professor Managay Reddi; Supervising Attorney , UKZN Campus Law Clinic, Mr Eben van der Merwe, and Professor David McQuoid-Mason of the Centre for Socio-legal Studies.

The Conference – attended by more than 350 delegates from 50 countries - was hosted by the Faculty of Law at Anadolu University, the richest and largest University in Turkey, which organised a full programme of academic and social events for delegates.

Reddi made a presentation on the UKZN experience before an international panel which debated: “So You Want to Start a Street Law Programme”, while van der Merwe participated in the Conference sessions and engaged in discussions with world experts on Clinical Legal Education for the purposes of his LLD degree.

McQuoid-Mason was Chair of the Conference Planning Committee consisting of 18 members from 12 countries and was also a member of the GAJE Steering Committee.

He made presentations on: (i) Using the Chicago Seven, Nelson Mandela and Saddam Hussein Trials to teach about the role of lawyers, judges and accused persons in the criminal justice system (conducted as a simulation); (ii) Voluntary and compulsory clinical law programmes: The South African Experience (part of a panel); (iii)  Some reflections on teaching clinical legal education in China (with two American colleagues); and (iv) Techniques for empowering clinical law students (conducted as a workshop).

At the welcome dinner, McQuoid-Mason facilitated an activity in memory of the late Ed O’Brien - the co-founder of Street Law Inc. in the USA - who had helped him to establish the first international Street Law programme at UKZN (then the University of Durban) in 1986.

McQuoid-Mason also organised and acted as MC for the GAJE Conference Cultural Evening involving over 40 countries; led a SADC team of drummers and traditional dancers from SA, Namibia, Malawi, Mozambique, Zimbabwe and Zambia and arranged for the delegates at large to assist the SADC drummers.

He called a brief meeting of the BRICS delegates at the Conference after the conference closing ceremony to discuss the formation of a BRICS Legal Education Forum (BLEF) to complement the other BRICS forums.  Delegates from China, Russia, India and South Africa attended, with only Brazil absent.

The Indian Law Institute and UKZN had undertaken to do the preliminary work in their respective countries regarding the formation of the BLEF. China and Russia agreed to go back to their national bodies to identify institutions prepared to take the initiative there.

McQuoid-Mason undertook to contact colleagues in Brazil to get them to nominate their appropriate institution. All information was to be sent to the Indian Law Institute which had agreed to convene the first BLEF meeting.

A GAJE Training of Trainers Workshop held immediately after the Conference was attended by 200 delegates from 44 countries.

McQuoid-Mason also acted as a facilitator for a workshop, while van der Merwe gathered further information for his LLD.

Several delegates commented on what an important role UKZN had played at the Conference and the Dean of the Faculty of Law at Anadolu University, Professor Ufuk Aydin, expressed the hope that Analolu University could establish academic links with UKZN.