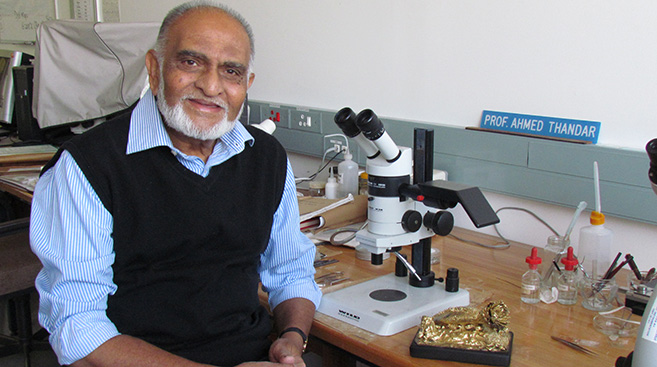 Emeritus Professor Ahmed Thandar of UKZN’s School of Life Sciences has been awarded the International Golden Echinoderm Award for a life-time of research into the taxonomy of sea cucumbers.

Thander recently attended the 15th International Echinoderm Conference, hosted by the Universidad Nacional Autonóma de México once every three years giving researchers from all over the world the opportunity to showcase their research and highlight interesting developments and gaps in knowledge.

Thandar was honoured to chair the first plenary session presented by a former fellow-student of his from the University of Miami, where Thander had studied as a Fulbright scholar. Besides the plenary talks there were 56 other oral and numerous poster presentations in two parallel sessions each day.

Over 230 delegates from 20 countries attended the conference, which included an excursion to Chinchen Itza, an ancient indigenous civilization that is one of the current wonders of the world.

Thandar received his award at a formal banquet at which organisers of the conference, Dr Francisco Solis Marin and Dr Alfredo Laguarda Figueras of UNAM commented: ‘We are delighted to hand over the Golden Holothurian Echinoderm Award as a Life Achievement Award to Ahmed Thandar for his life work on the study of the taxonomy of African holothuroids. He is rated as an internationally recognised scientist, and continues to work on the taxonomy and biogeography of the Holothuroidea.’

Thandar started researching sea cucumbers in the late 1960s and has published over 55 peer-reviewed papers, co-authored a practical text and made numerous presentations at national and international conferences. To date he has erected, singularly or with his co-workers, 72 new taxa including two new families, 13 new genera, 1 new subgenus and 55 new species and described numerous new records, especially from the southern African region. He is also been honoured by having one genus and two species named after him.

Thandar, currently preparing a monographic study of the southern African sea cucumbers and researching some iziko South African and British Museum collections, has served as referee for numerous manuscripts submitted for publication in national and international journals and has supervised and/or served as examiner/reader of several theses.

Mr Gan Moodley of UZKN’s School of Life Sciences said: ‘It is pleasing and exciting to note that Professor Ahmed Thandar has been recognised for his lifelong work on the taxonomy and biogeography of the Holothuroidea (sea cucumbers), one of the classes belonging to the Phylum Echinodermata (spiny-skinned animals). Over the years Professor Thandar and I have spent many rewarding hours discussing these wonderful and unique animals and I am delighted for him to have been recognised by his international peers and in receiving this well-deserved award.’