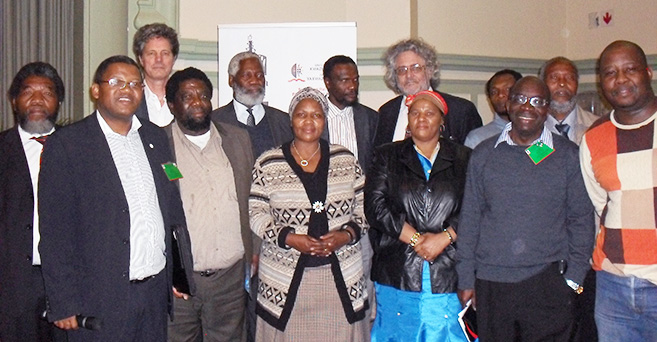 Academics from the School of Religion Philosophy and Classics with guests at Prophet Isaiah Shembe's public lecture.

It was held at the University of Kwazulu-Natal’s Colin Webb Hall in Pietermaritzburg following a request by UKZN students belonging to the Ibandla lamaNazaretha who wanted an opportunity to host a lecture and inform others about who they are and what their religion is all about.

Professor Gerald West, a senior professor within the SRPC, spoke on the theme: “The Contribution of Shembe to African Biblical Theology”.

West’s research interests lie in African Biblical Hermeneutics, Old Testament Studies and the role of the Bible and religion in the public realm. Widely published having written books, essays in books, and journal articles, he recently became a Fellow of the University of KwaZulu-Natal, a distinguished reward for outstanding academics and for research excellence.

The Bible was the focus of West’s lecture, in particular ‘its place in Isaiah Shembe’s restoration of African community, in the aftermath of colonial conquest and missionary-colonial-kholwa Christianity.’

The lecture also provided an opportunity for a member of the Nazareth Church, the Reverend FI Ngidi, to respond to West’s lecture, and offer approval on the things which West spoke of which were correct, and also to offer criticism and corrections on other issues.

West was hopeful that the inaugural lecture would lay a foundation for more Shembe lectures in the future, ‘I hope that this will be the beginning of many such lectures, and that those of us who are here for the first, will also be here for the 10th, the 20th and the 30th lectures.’