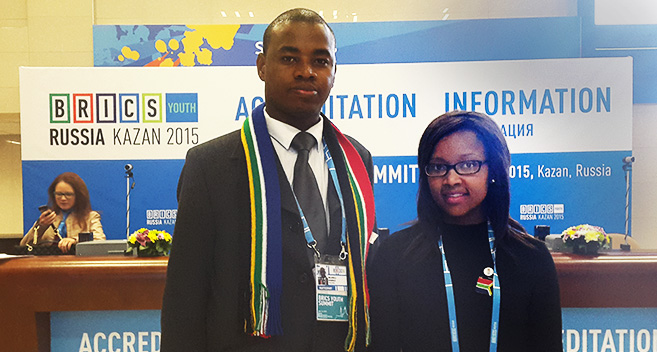 UKZN students in Russia for the inaugural BRICS Youth Summit.

Two Masters of Social Sciences in Public Policy students, Ms Xolile Kunene and Mr Nhlanhla Khumalo, were part of a 32-member South African delegation led by the Deputy Minister in the Presidency, Mr Buti Manamela, to the first ever BRICS Youth Summit in Kazan in Russia last month.

Kunene and Khumalo were both seconded by the South African Youth for International Diplomacy (SAYID), an organising committee of South Africa’s youth participation in the G7, G20 and Euro-BRICS summits.

The members participated in cultural activities and sightseeing at various centres including the Kremlin in the Red Square. They also travelled by train from Moscow to Kazan, which Kunene described as a ‘truly a wonderful experience in the countryside. We also got to see the Kazan Kremlin before the official business started.’

In keeping with Russia’s Presidency of BRICS, deliberations at the Summit concentrated on five areas of co-operation - economic, political, humanitarian, scientific and technical, and information.

At the end of the Summit, an action plan and declaration was presented to the respective youth ministers and executive authorities responsible for Youth Affairs. Each country was invited to send two or three youth representatives to the VII BRICS Heads of States Meeting in Ufa.

A Memorandum of Understanding (MoU) was signed at the Summit between the different youth agencies within BRICS to ensure collaboration in all areas involved with improving youth development.

South Africa was represented by the National Youth Development Agency (NYDA). The signing of the MoU will enable the South African youth to have a formal platform that will create a conducive environment for the sharing of best practices, youth exchange programmes and also joint access to all streams within BRICS for youth development.

Russia plans to launch the BRICS Network University and to organise a BRICS Global Summit in Moscow later this year.