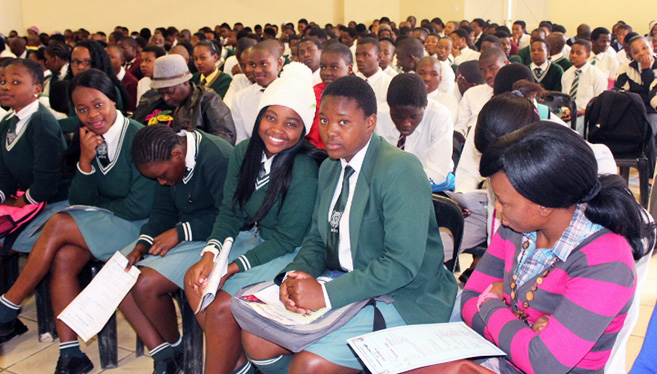 Ntuli, who is originally from Ulundi, said: ‘The summit was held to help young people in my community find out about bursary opportunities to further their studies while the business expo aimed to assist unemployed youngsters earn a living through starting their own business thus creating employment for themselves and others in the community.’

The expo involved institutions which fund business ideas of young people, including the National Youth Development Agency and Ithala Bank.

The summit concluded with a prayer asking for guidance and protection for Grade 12 pupils as they pursue their education and their future careers.

Several UKZN alumni addressed the youngsters, offering advice and encouragement. One of the youngest Members of Parliament, Mr Mkhuleko Hlengwa, encouraged young people to use education to improve their lives.

Ntuli said the youth were also inspired by Mr Xolani Ntombela, a highly successful businessman in Durban who grew up near Ulundi. ‘He was there to let young people know that they can make it in business, regardless of their background,’ said Ntuli.

The summit was hosted and funded by the Ulundi Municipality and included transport and refreshments for the participants. Said Ntuli: ‘I’d like to acknowledge Ulundi’s Mayor, Ms Jauna Manana: the Municipal Manager, Mr Toti Zulu: Municipal Speaker, Mr S Mlambo; the Director of the Community Services, Mrs Sokhela; and the Communications Manager, Mrs Thandeka Ntombela.’

Ntuli said he was grateful for the support he has received from a variety of quarters including his mother, members of the Ulundi Municipality and his church, the Covenant Fellowship Church.

He also thanked his mentor, Mr Jabulani Joseph Zondi, who attended the entire summit and shared ‘powerful words’ with the youth and learners.