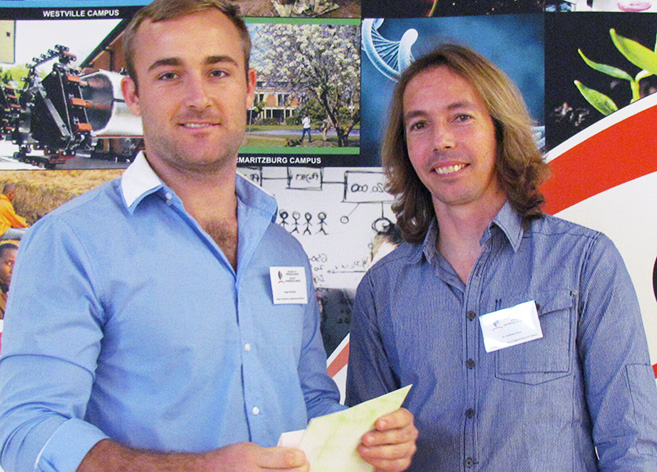 The Council of the Geological Society of South Africa’s 2014 Haughton Award has been won by UKZN Geological Sciences student Mr Keegan Benallack for his Honours dissertation: “The Seismic Stratigraphy and Evolution of the False Bay and North Lake Basins of Lake St Lucia, Northern KwaZulu-Natal.”

The award recognises an honours dissertation of exceptional merit in Geological Sciences produced at a South African university in the year prior to the award.

Benallack’s work is the first detailed study made of the geology and geomorphology of the St Lucia system since the mid-1980’s. At the heart of the investigation was the aim to understand the evolution of the two main lake basins within the context of natural changes in climate and sea level - the rationale being an improved understanding of the natural drivers of the system. Results from the study will benefit management practices at the iSimangaliso Wetland Park where there have been several major droughts dramatically affecting the system.

According to Benallack, the two main depocentres or sites of maximum sedimentation in the lake are underlain by a network of ancient river valleys which host successive cycles of sedimentation reflecting changes in sea level and climate. By analysing these important sedimentary layers using very high resolution seismic tools and sediment cores, researchers can uncover the changes to that area. These appear to encompass several cycles of change from rivers to lagoons and finally to the contemporary lake conditions of today.

He hopes his research, using new tools and knowledge about marine depositional systems, will enable him to carry out competent work in the fields of petroleum geology and basin analysis in the future.

‘I was most impressed with Keegan’s work. He demonstrated a very mature grasp of admittedly foreign concepts that we do not teach at undergraduate level,’ said Benallack’s supervisor, Dr Andrew Green. ‘In addition, he was incredibly hard-working, spending almost eight weeks in the field to help collect data that formed part of a multi-disciplinary project between the School of Chemistry at the University of the Witwatersrand and UKZN’s Geography and Geology disciplines. I am really proud of what Keegan accomplished - he has flown the flag high for UKZN. Our department last won the award in 2007 so clearly the Marine Geology team at UKZN is starting to really get things right,’ said Green. ‘A fitting end to a year of dodging hippos, crocodiles, scorpions and mosquitoes!’

Benallack says his interest in Geology was sparked by his lifelong fascination with the natural environment. He has enrolled for his MSc degree at UKZN but has just learned of his acceptance at the University of Aberdeen in Scotland to undertake an MSc in Integrated Petroleum Geoscience, and will sadly be saying goodbye soon.

Speaking fondly of his time at the institution, he says he will miss the UKZN Geology team. ‘The Discipline of Geology here at UKZN has provided me with a first class education to rival any other country-wide. The team of highly trained and professional lecturers and staff left no stone unturned - excuse the pun - in making sure we earned an excellent qualification.

‘The combination of comprehensive lectures with extensive field training ensured our progression to competent young geologists. This was bolstered by a really friendly and welcoming atmosphere at the varsity, which I will always remember. My honours year was by far the highlight of my career at UKZN.’

Benallack says his goal is to be a successful exploration geologist in the petroleum industry, hopefully in South Africa’s fledgling energy industry or alternatively overseas.