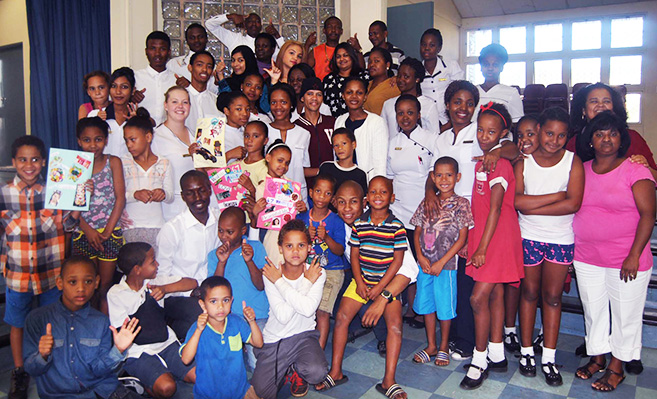 Second year Nursing students at UKZN and their facilitator, Mrs Silingene Ngcobo, visited the Women of Wentworth (WOW) organisation to assist in taking care of children at the centre as part of their 67 minutes for Mandela.

WOW runs an after care programme which feeds children and helps with their homework.

Director of the organisation’s family resource centre, Mrs Patricia Dome, said: ‘The aftercare programme is run on certain days of the week depending on the availability of food from local sponsors.’ The centre is also a fulltime home to two children who were neglected by their parents.

The nursing students helped about 20 Austerville children aged between 5 to 12 with their homework and art tasks and also played games with them.

The students became aware of the centre and the community through their community engagement and also from local motivational speaker, Mr Gerard Genis.

Genis recently visited UKZN to speak about his struggle with HIV and AIDS. ‘I wouldn’t be where I am today if it was not for nurses. I wanted these kids to also know the importance of nurses,’ said Genis.

Genis (33) discovered he was HIV positive while in matric. ‘My life then abruptly took a bad turn. I started smoking and drinking heavily. I was also promiscuous until I met nurses who made it clear to me that I didn’t have to live on the streets waiting to die.’

‘I believe creating awareness at a young age will help prevent children escape ending up in a situation similar to mine.’