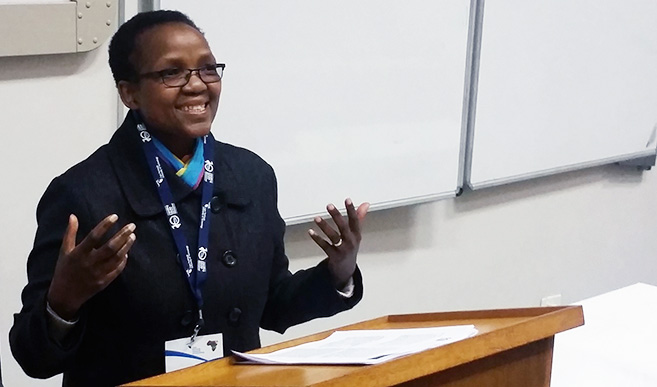 Ms Phindile Dlamini presenting her paper at the conference.

Language practitioners who translate graded readers from English into isiZulu are proficient in the language, but lack the skills of modulation to make the translation sound natural and authentic.

This was the substance of a paper recently presented by a Lecturer within the discipline of isiZulu on the UKZN Pietermaritzburg campus, Ms Phindile Dlamini, to the 18th International Conference of the African Language Association of Southern Africa (ALASA). The paper was titled:  “Analysis of Transposition and Modulation in the translation of graded readers from English into isiZulu.” The conference was hosted by the Cape Peninsula University of Technology.

Dlamini presented her paper under the conference theme: “New directions and perspectives in African language research in the 21st century.”

Dlamini used procedures which were initially used by the linguistic translation theorists Vinay and Darbelnet in their translation from English to French.

‘It is important to look out for what has worked in other languages and see if it can be applicable to our languages,’ she explained. ‘We want to come up with tools that we can use to assist our budding translators.’

Dlamini’s key finding was that modulation is an essential element in translation, which most translators lacked. She found that these translators were able to transpose, but were unable to make the translation sound natural.

‘The translation loses the essence: and modulation brings in that essence,” explained Dlamini. She added that modulation provides a foundation for any translator.

‘Once a translator reaches a level where the translator can modulate beautifully, then that piece of work is perfect, it sounds natural, it sounds beautiful,’ she explained. ‘It’s as if it is originally written in that language.’

‘This paper is part of my PhD study which was motivated by my passion for linguistics. I like to analyse things,’ explained Dlamini. ‘I like to find the phonology, the morphology and the nitty-gritty of language, and I found that the graded readers allowed me to do that.’

Dlamini’s paper was well received at the conference.  She said that she had received valuable suggestions and advice from the scholars present. In the next few months Ms Dlamini would like to complete her PhD.  She has further plans of pursuing additional research in the fields of linguistics and translation.