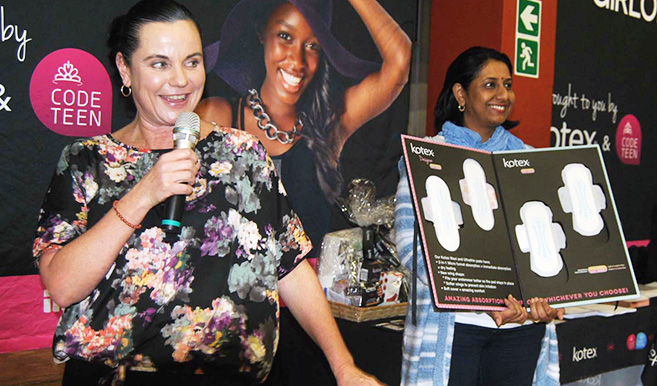 Student Support Services in UKZN’s College of Health Sciences  recently hosted a series of fun-filled girls-only workshops titled: Girlology - the Ultimate Guide to SURVIVING and THRIVING as a Girl.

The workshops, facilitated by Life Coach Ms Karen Burt, have been held around the country since 2012, empowering and transforming more than 12 000 women aged between 18 and 26.

The four, three-hour UKZN workshops were held on the campuses at Westville, Howard College and the Medical School. Day and evening programmes attracted more than 600 students.

The workshops, designed by Burt and sponsored by Kotex, encourage young women to analyse how they perceive themselves and how negativity and judgments within society can create an unhealthy environment for them. Issues discussed through games included no judging, consequences and unconditional love and sisterly love.

The students were placed in groups of four and two to discuss and share their likes, dislikes, insecurities, judgements, dreams and motivations. They were encouraged to chat to each other in a safe environment and share their personal stories, referred to as ‘empting their balloons’.

The workshops emphasised self-belief, self-esteem, self-love, self-respect and self-affirmation in a positive, fun environment where female students were given the opportunity to focus on how they judge themselves and the impact of such judgement on their well-being.

Male students joined the last session of the workshops for an open dialogue on how men perceive women and vice-versa.

A burning issue for the men was the issue of indecision.  They generally agree that it is difficult to read a woman’s mind and get a clear sense of what they really want.  The women were generally concerned about, ‘why do men cheat’ and the difference between “men” and “boys”. This led to discussions on mixed messages, different perceptions and communication.

Student Support Services Counsellor at the College, Mrs Wulli Thaver, reiterated the support in place to make the journey a successful one, and encouraged the women to always make use of services available to them.