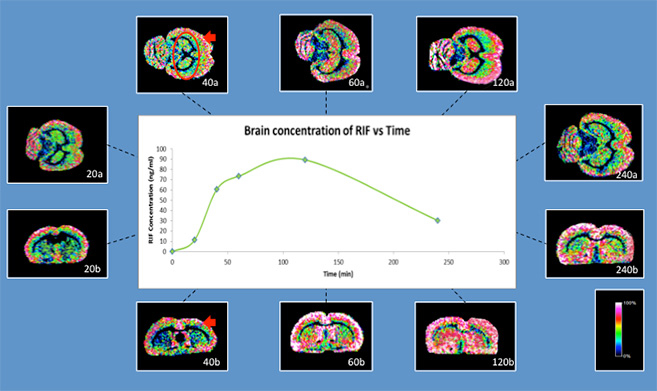 Histopathology is the science concerned with the cytologic and histologic structure of abnormal or diseased tissue.

‘However, these methods are expensive and only show total drug-related materials.’

Govender explained that matrix assisted laser desorption ionization mass spectrometric imaging (MALDI MSI) is a label free technique, which offers the advantage of determining the distribution of the parent drug and metabolites simultaneously.

The researchers recently co-authored two papers visualising the time-dependent distribution of TB drugs, Rifampicin (Assay and Drug Development Technologies) and Pretomanid (Xenobiotica), in rats using this new specialised technique.  The aim of this study was to establish methods for the preclinical evaluation and localization of antibiotics in the rat brain and understand its potential to neuroprotection.

They are continuing to expand the study to include other antibiotics and the technique they are using has received interest from other disciplines.

Dr Nirmala Gopal from the College of Humanities is interested to establish which areas of the brain are affected by street drugs and whether the current treatment regimen provided by rehabilitation clinics also target those areas while Professor William Daniels of the Neuroscience Research Group wants to understand whether improvements can be made to formulations of drugs for Alzheimers disease.

The researchers paired the LCMS/MS technique with matrix-assisted laser desorption/ionization mass spectrometry imaging (MALDI MSI) to show the time-dependent manner in which the antibiotics are able to enter and leave the brain.

Without any requirement for complex pre-processing, the researchers were able to produce images with a relatively improved resolution and localisation compared to those acquired using more complex imaging methods in the study, showing MALDI MSI to be an invaluable tool in drug distribution studies.