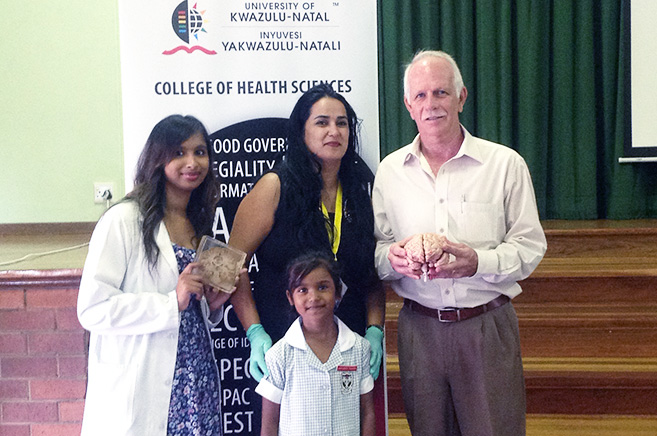 The pair launched their school-visiting programme during Brain Awareness Week 2015 where they did a fun, interactive presentation at Atholton Primary School which sensitised the learners about the important daily functions of the brain.

They said it was an enriching experience to witness the ‘overwhelming excitement and curiosity’ sparked in primary school children when they learned about the brain.

As academics, it was important to remain locally relevant and target youngsters in the Durban community with such interventions, they explained.

Thaver said it was important to educate young minds to discover and explore the exciting world of the brain, spinal cord, neurons and the senses. ‘The aim is to teach them that the brain is a marvellously complex and intricate organ of the body.’

Thaver’s research interests include cancer, tuberculosis and HIV-associated neurocognitive disorder while Harricharan recently competed with masters and PhD students, scooping the Emerging Young Scientist Award for an Honours project she presented at the 42nd Physiology Society of South Africa Conference 2014.

Harricharan also impressed adjudicators with the same study looking at HIV-associated neurocognitive disorder at the 2014 School Research Symposium where she was awarded Best Oral Presentation in the category: Human Body: Form & Function. Harricharan said a lot of stigma and stereotypes surrounded mental health, especially in South Africa, which they hope to reduce through education.

Both researchers are part of the School of Laboratory Medicine and Medical Sciences (LMMS) Neuroscience Group which was established at UKZN in 2008 by the Dean and Head of School, Professor William Daniels, together with its Academic Leader for Research, Dr Musa Mabandla.

The group recently hosted the 12th International Meeting of the Society of Neuroscientists of Africa.