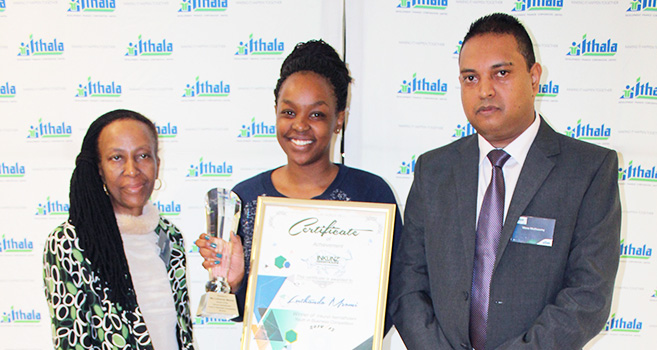 The Ithala project involves young entrepreneurs submitting business proposals or concepts in the hope of being chosen to receive the necessary business acumen and financial assistance to put their theory into practice!

Msomi’s business proposal was selected from scores of others following an arduous process.

Entrants were required to submit a business plan with supporting working documents and were then called in to present the concept before a panel of judges after which 12 finalists were announced.

Msomi’s concept is cookware which is an alternative to the open fire system. It makes use of firewood only to retain the cooking flame and not only saves money but also ensures the flame is retained securely. This making it affordable and safe to use. The light and portable cooking concept won accolades for its practicality during load-shedding.

Msomi thanked Enactus for the skills that she acquired through her work with the UKZN organisation. ‘Enactus helped harness a lot of my raw ideas and channel them into profitable business concepts that I look forward to developing,’ she said.

‘Ithala Bank will provide the business funding and acumen I require to help me grow the business concept into a profitable and operational business. With this support, my goal is to become a successful entrepreneur.’

With her Busisiwe Mtungwa also won support from Ithala Bank for her potato farming business which makes use of urban farming methods to produce better yields than traditional African methods.