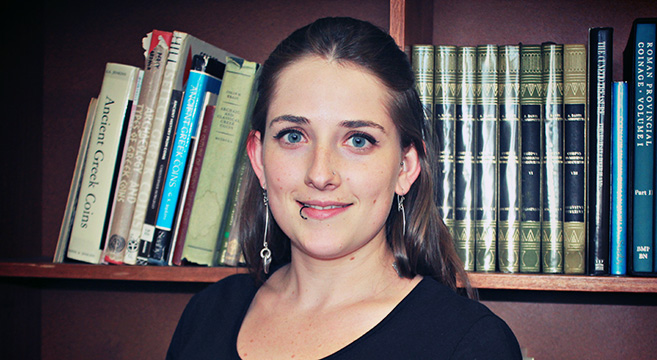 ‘The novel, along with the many others which followed it, entertains the idea of a lost white civilization occupying a territory within a Southern African context,’ said Tappeiner. ‘This idea was not inspired purely by imagination, but also, as my paper demonstrates, by the discovery and analysis of remarkable ruins in southern Africa, and in particular those of Great Zimbabwe in the 19th century.’

The primary focus of her study is Haggard’s depiction of ancient civilizations and especially his use of classical material and imagery which are employed variously throughout the narrative.

Tappeiner also examined evidence of Haggard’s use of classical authors, including Herodotus, in his depiction of landscape and people, Homer for his representation of a graphic battle scene, and both Virgil and Ovid in their depictions of the eponymous and seemingly chthonic mines, also referred to as the ‘Place of Death’, which functions as a proxy for the underworld in a variety of ways.

‘My paper, which was presented under the panel 'reception studies', was well received and I was offered valuable suggestions from the audience.

‘I feel conferences such as this are an excellent opportunity for students and academics to meet and interact with people who, while also interested in Classics, offer a wide variety of research interests and new insights. Additionally, these conferences provide post-graduate students with the chance to engage with a very important aspect of academia.’